Woman with cervical cancer gets €1.2m and hospital apology 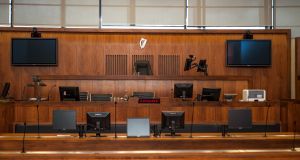 Mr Justice Kevin Cross, noting the settlement, offered his sympathy to the woman whom he said was recently widowed.

Galway University Hospital has apologised to a woman with cervical cancer for a failure to detect an abnormality in her original smear test.

The apology was read to the High Court as the pensioner, who cannot be named by court order, settled for €1.2m her action against the HSE over the incorrect reporting of her smear test.

The woman is currently in a palliative regime for cervical cancer.

In a letter of apology read to the High Court, the general manager of Galway University Hospital, Chris Kane, offered “a sincere and unreserved apology” for “the failure to detect an abnormality in your original smear test.”

The letter added: “ We can only express our sincere regret to you for what has happened and for its devastating consequences.”

Patrick Treacy SC, with Ciara McGoldrick BL, for the woman, previously told the court she was given the all clear on tests taken under the cervical screening programme in 2006 and 2009.

The woman had sued the HSE over her smear samples, tested at a laboratory at the hospital.

It was claimed there was a failure to correctly report and diagnose and her smear test of 2006 was misinterpreted so her cancer was allowed to develop and spread unidentified, unmonitored and untreated until she was diagnosed with cervical cancer in October 2009.

Liability was conceded in the case last December.

Following her diagnosis of Stage 2 cervical cancer in October 2009, the woman underwent chemotherapy and radiotherapy.

Five years ago, she was confirmed to have cancer in her right lung and her pelvis and was commenced on palliative chemotherapy. She later developed the disease in her left lung.

At a previous hearing, Mr Treacy, instructed by Cian O’Carroll solicitors, told the court the woman was referred by her GP to a gynaecologist in October 2009.

Counsel said a stage 2 invasive cervical cancer was diagnosed. Counsel said the result of the 2009 smear sample came back saying “no abnormality detected” after her cancer diagnosis.

“After that diagnosis was made, she got the result of the smear test which said all clear,” Mr Treacy said.

Reviews carried out in 2012 of the 2009 smear test showed the original report of the smear test was incorrect. In 2013, a further review of the same smear sample showed a high grade squamous lesion and possible glandular involvement.

The result, it was claimed, was not communicated to the woman.

In May last year, she was advised by her treating gynaecologist of the reviews carried out on her 2009 sample.

On Tuesday, Mr Justice Kevin Cross, noting the settlement, offered his sympathy to the woman whom he said was recently widowed.