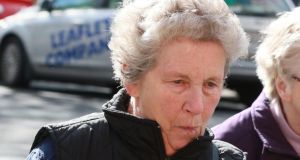 A woman who fell on an escalator at Dublin Airport has been awarded €40,000 damages by a High Court judge.

Mr Justice Michael Hanna said Elizabeth Lavin was “an unfortunate neophyte in the ways of escalators” and, had she taken the lift instead, no accident would have happened.

Had sufficient signs been available at the time of the accident four years ago, he was satisfied Ms Lavin probably would have availed of the lift, the judge added.

He was giving judgment on the action by Ms Lavin (69), Blackhall, Calverstown, Kilcullen, Co Kildare against Dublin Airport Authority PLC as a result of the fall on the escalator on November 2nd, 2011.

She claimed, suddenly and without warning, she was caused to fall down on her face as she was travelling up the escalator in Terminal 2. She was taken by ambulance to Beaumont Hospital and treated for a wound to her head and other minor lacerations.

She was later referred to an orthopaedic surgeon because, it is claimed, she had pain in her head, arm, hip and knee.

All the claims were denied. The DAA said this was an unfortunate incident which was not the fault of the DAA. It further contended Ms Lavin did not hold the hand rail of the escalator and became unbalanced.

In his decision, the judge said there was no issue in the case as to the construction, design and maintenance of the escalator at Dublin Airport.

He said signage and available advice are the best options when accommodating mass transit.

In 2013, there was a change in signage at Terminal 2 with a sign put up showing there was a lift. At the time of the accident, there was no sign to say the lift could be taken to Departures, he said.

Mr Justice Hanna said he did not fault Ms Lavin for not resting her hand appropriately on the handrail or for having her baggage behind her instead of in front of her on the escalator.

However, he ruled, there was contributory negligence on her part for not asking for help from an airport assistant. Mrs Lavin, should have asked for assistance and would have been pointed to the lifts, he said.

The judge assessed contributory negligence at one third, with the effect of reducing the total award of €60,000 to €40,000.

He put a stay on the award in the event of an appeal and directed that €25,000 be paid out immediately to Ms Lavin.