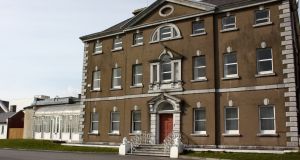 Mary Harney says she is readily identifiable in the Commission of Investigation’s report as having been born at the Bessborough Home in Cork.

A woman has been given permission by the High Court to bring an action aimed at quashing certain parts of the report of the Commission of Investigation into mother and baby homes.

Mary Harney (72), an advocate for the rights of victims of historic human rights abuses in Irish institutions, claims her statutory rights were breached by alleged failure to be given an opportunity to make submissions on the commission’s draft report before the final report was published.

Ms Harney, who lives in Galway, claims she was entitled to make submissions because, although she is not named, she is readily identifiable as a person born in the Bessborough Home in Cork in 1949.

Had she been given such an opportunity, it is claimed, she could have said the commission should not have omitted evidence she gave to it of abuse and neglect while boarded out between 1951 and 1954.

The case is also against the Government and the State.

On Monday, Ms Justice Nuala Butler granted an ex parte applicaiton by Michael Lynn SC, for Ms Harney, to bring the proceedings. The case comes back in May.

It is claimed the commission should delete a footnote in the report which suggests that accounts of mothers cutting the grass at Bessborough with scissors were invented or contaminated by a work of creative writing. This finding is without proper evidential basis, she claims.

She wants a finding to be corrected which says that although “perhaps the majority” of boarded out children were beaten, it was “impossible” to tell “how violently” they were beaten.

Ms Harney says, if she had been given the opportunity, she would have referred the commission to her own statement and affidavit, which described the beatings she received.

She would also have referred the record of her account to the confidential committee of the commission which provided a forum to former residents to provide either written or oral accounts of their experience.

Certain references including access of the commission to the voices of the children, what was known of their circumstances, the emotional and physical problems they faced, and the prejudice they faced, ignored her evidence and the evidence of other former residents and ought not have been made, she says.

A reference that witnesses who were boarded out by the local authorities were former residents of the home in Tuam, Co Galway, was incorrect and should have been amended to include reference to her evidence, she says.

In relation to the commission’s recommendations on redress, the report should be amended to ensure that all children boarded out — and not only those who lived without their mothers in the institutions and those who were overtaxed on their inheritances — would be recommended as eligible for redress.

Ms Harney says she would have referred the commission to the findings relating to abuse, neglect and lack of meaningful enforcement of child protection rules, to her own evidence, and to the report of the confidential committee.

The failure of the commission to comply with its obligations under section 34 of the Commissions of Investigation Act, providing for draft reports to be sent to certain people was a violation of her rights, in particular her right to an effective remedy for violation of human rights suffered as a child.

Her rights to privacy, freedom of expression, and right to a good name had also been violated, it is claimed. Her counsel told the court it was accepted the commission has absolute legal privilege in relation to the report, which means it cannot be sued for defamation.

She also claims that because she is identifiable from the report, and because the reference in it to her statement is partial and incomplete, it gives the impression she has been inconsistent in her account, and that her account is unreliable, not credible and contaminated.

She says her right to natural justice and fair procedures had also been breached, she says.

She seeks orders and declarations that certain paragraphs of the report should be quashed, that the commission acted unlawfully and in breach of her Constitutional and European Convention rights.