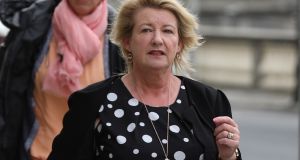 A woman who took a ‘White Knuckle Boat Ride’, involving 360 degree turns in the middle of the ocean, has sued for damages at the High Court over fracturing her elbow.

The injury happened when Siobhán Kellett, a dancing teacher, was on a seven-night Caribbean cruise in April 2016 with her husband Leslie to celebrate her 50th birthday and their silver wedding anniversary. Their holiday was to finish with five days at a jive festival in Las Vegas.

Ms Kellett (53), Rockfield Green, Maynooth, Co Kildare has sued British company RCL Cruises Ltd of Weybridge, Surrey who operated the cruise ship, Freedom of the Seas, and was allegedly responsible for the excursion in St Martin in the West Indies called The White Knuckle Boat Ride.

She alleges failure to provide any or any adequate safety restraints, harness or belts on the jet boat to ensure passengers were kept safe from injury.

The claims are denied and the defendants also plead Ms Kellett failed to follow instructions and failed to have regard for her own safety.

Mr Justice Anthony Barr was told the boat ride was described as “an adrenalin infused rush from a water roller coaster” and included spins and speeds of 53 miles per hour which involved the thrill of holding on “for dear life”.

In evidence, Ms Kellett said it was like “Christmas Day” when she stepped onto the cruise ship at Cocoa Beach, Florida, and the €3,674 cruise, which the couple had paid for by instalments over two years, was “just wonderful”.

She said the couple took the pre-booked excursion, costing €120, when the ship docked on the fifth day at St Martin in the West Indies.

She said they were given life jackets and assigned seats beside the skipper on the fibreglass boat which she described as “basic looking” like “a skip”.

The skipper told them to use the handrail and to peg their feet on the ground and he would give a hand signal when he was going to do the 360 degree turn on the ocean.

She said she was thrown out of her seat and banged her elbow against the metal side of the jet boat during two 360 degree manoeuvres of the ride.

Referring to the first 360 degree turn, she said: “We were out in the middle of the ocean and I was holding on tight but I banged my head against the skipper.”

She said the skipper then signalled for her to change places with her husband with the effect she was on the outside seat.

On the next spin, she said she was hanging on tight to the bar in front of them but was lifted out of her seat.

“I remember thinking what was I going to do, tumble into the water, but I came back down on the seat and was thrown against the side of the boat and my right arm banged against the side.”

The pain was “horrendous” and she felt like a child “trying to be very, very brave” because she did not want to ruin the excursion for everybody else, she said.

When they were back on the cruise liner later, she was told by a medic her elbow was not broken but when she had an x-ray after her return home, a non-displaced fracture of her right elbow was discovered.

The accident brought a halt to the enjoyment of their holiday and cast a shadow over the rest of their trip in Vegas, she said.

Cross examined by Jim O’Callaghan SC, for the defendants, Ms Kellett said she has been on roller coaster rides before and felt perfectly safe.

Asked by counsel did she see the boat ride as risky, she replied “ I did not see it as being dangerous at all”.