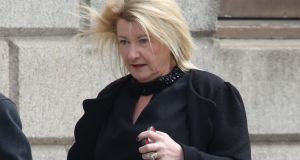 Siobhán Kellett fractured her elbow during a ‘White Knuckle Jet Boat Thrill Ride’ and has lost her High Court action over the incident. Photograph: Collins Courts

A woman who fractured her elbow during a ‘White Knuckle Jet Boat Thrill Ride’ has lost her High Court action.

Mr Justice Anthony Barr said Siobhán Kellett, who went on the shore excursion while on Caribbean cruise with her husband, had signed up for an “adrenaline infused” boat ride which involved 360 degree turns in the middle of the ocean.

“She was not able to keep herself seated as she had been instructed to do and as a result she injured herself. Unfortunately it was simply an injury which occurred in the course of a vigorous activity,” he said.

A decision on liability for the costs of the action will be made on a later date.

Ms Kellett, a dancing teacher, was on a seven night Caribbean cruise, which cost €3,674, to celebrate her 50th birthday and silver wedding anniversary. The holiday was to finish with five days at a Las Vegas jive festival.

She said she was thrown out of her seat and banged her elbow against the metal side of the jet boat during two 360 degree manoeuvres on the boat ride, a pre-booked excursion the couple took when their cruise ship docked at St Maarten in the West Indies.

Ms Kellett (53), of Rockfield Green , Maynooth, Co Kildare, sued British company RCL Cruises Ltd, of Weybridge, Surrey, who operated the cruise ship Freedom of the Seas. She claimed it was responsible for the boat ride.

She alleged failure to provide any or any adequate safety restraints , harness or belts on the jet boat to ensure passengers were kept safe from injury. The claims were denied.

Mr Justice Barr said he could not hold the injuries suffered were attributable to any negligence on the part of Ms Kellett. She had no doubt it was going to be a vigorous ride becuase the advertising literature promised to have her “involuntarily laughing and praying for her life”, he said.

Ms Kellett, he held, had not established the excursion operators failed to comply with the relevant standards applicable in St Maarten and there was simply no evidence of what those standards might be.

Finding no negligence for failure to provide restraints like a harness, Mr Justice Barr said, given the risk of capsize, one could not have such retraints in use on a boat.