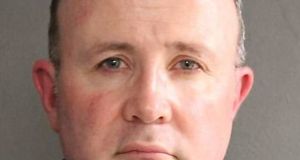 A dispute between six siblings over their late mother’s will cannot proceed before the High Court because one of the parties, a Catholic priest, has been charged with drug offences in the United States.

New York-based Fr Michael O’Leary (aged 50) was arrested by New York police in the early hours of St Patrick’s Day last after they found him and another man in a vehicle.

Investigating officers claim they recovered half an ounce of methamphetamine, two scales and other materials used for packaging narcotics following a search of the vehicle.

The action is aimed at setting aside the will of their late mother, Mrs Elizabeth O’Leary, who died in September 2014.

The four plaintiffs seek an order condemning a will made by the late Mrs O’Leary of Morehampton Road, Donnybrook, Dublin 4 in 2009 on grounds that she was not of sound mind when it was executed.

It is also alleged that undue influence was exerted over the late Mrs O’Leary by the defendants when she was preparing and executing the 2009 will.

Fr O’Leary is expected to give evidence against his four siblings’ claim.

Last week lawyers for Fr Michael asked Ms Justice Leonie Reynolds, who is in charge of the High Court’s chancery division to adjourn the case as it was not possible for their client to attend court due to “a somewhat sensitive” matter.

Fr O’Leary, the judge was told, is charged with drug offences and is currently undergoing a 90-day residential drug rehabilitation programme in New York.

Despite their best efforts his lawyers have had very little communications with Fr O’Leary since his arrest and the rehabilitation programme won’t be completed until mid-July.

From the limited instructions, they have received, his lawyers in the will case say it would be prejudicial to Fr O’Leary to interrupt the programme he is currently undergoing, the court was told.

He is due back before a New York court in respect of the drugs charges later this month,

His lawyers say he is hopeful that given his past good behaviour and having undergone treatment the US court will treat him with leniency if Fr O’Leary is convicted of the offences.

His lawyers are unclear about the terms of Fr O’Leary’s bail, but believe he would be unlikely be able to travel to attend at the High Court.

His lawyers add that despite being unable to get firm instructions they are concerned that Fr O’Leary is unlikely to be emotionally or psychologically ready to address the complex issues raised in the will dispute.

The case had been originally listed for hearing in January, and Fr O’Leary had attended court from America.

However, there was no judge available to hear the action and the case was fixed for June 19th.

The plaintiffs had been made aware of their brother’s situation, the court also heard.

The adjournment application was opposed by lawyers for the plaintiffs.

Ms Justice Reynolds expressed the court’s displeasure at the application, which she said lacked detail about Fr O’leary’s future availability.

Clearly, the case which had been fixed for hearing in advance could not go ahead as scheduled and a new date would have to be fixed, the judge said.

The judge adjourned the matter for mention to next week to allow Fr O’Leary’s lawyers to obtain more information about the criminal proceedings in the United States, and when he would be in a position to give evidence.