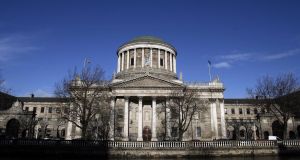 Mr Justice Mark Heslin says the matter will be reviewed in six months and, depending on the progress made, exit from wardship remains possible. Photograph: Chris Maddaloni/ Collins

A vulnerable and traumatised young woman must remain a ward of court for now because discharging her from wardship could put her life at risk, a High Court judge has said.

The woman came here five years ago with her mother and brother as a chronically traumatised teenager, having experienced violence in her native Africa.

She spent some time in direct provision before being made a ward of court on a crisis basis in 2017 arising from HSE concerns about her physical and mental health.

The court heard she was spending much of her days praying and fasting and standing before windows trying to soak up light which she perceived as “goodness”.

Due to long periods not eating or taking fluids, her food and fluid intake was well below that necessary for adequate growth and development. Concerns about her deteriorating condition and refusal to comply with treatment led to the HSE applying to a night-time sitting of the High Court to have her made a ward of court and moved to hospital.

Her mother and brother supported the application but the woman has since become estranged from them.

Following a diagnosis of psychosis, she received specialised care and treatment in hospitals and other placements, and has made sufficient progress to live in the community since earlier this year with care staff and other supports.

She now wants to exit wardship but her carers and treatment team believe, if permitted to do so at this point, she could seriously relapse for reasons including she lacks insight into her trauma and refuses to accept her diagnosis and need to take medication.

Her refusal to take medication led to her being hospitalised some months ago for a number of weeks and she has been fed by naso-gastric tube in the past due to obsessive fasting.

When her case was reviewed this week by Mr Justice Mark Heslin, he continued orders retaining her in wardship but stressed the matter would be reviewed in six months and, depending on the progress made, exit from wardship remains possible.

Speaking to the judge via video link, the woman said she wanted to be independent and to exit wardship and her future was “in God’s hands”.

In his ruling, the judge noted, if the woman exits wardship, her treating team are concerned, due to lack of insight and non-engagement with her family, she could again relapse with potentially no one to notice that, and her life would be at risk as previous relapses had led to her starving herself.

What was instead proposed was a detailed treatment plan, which has been discussed with the woman, aimed at working collaboratively towards the goal of exiting wardship.

The judge assured the woman he had listened to and taken account of her views. While she had said the matter was “in God’s hands”, the court and her carers have a role to play and her views, however sincere and genuine, “are not the determining factor when what she wants is plainly, on the medical evidence, not in her best interests”.

On the evidence, he could not discharge her from wardship now as that could create a situation which could put her life at risk and he was satisfied the existing orders remaining in place were very much in her interests.

He agreed with her court-appointed guardian she should follow the current trajectory of continuing her medications, starting an educational course, enrolling and attending English classes, and accepting assistance with living skills and promoting a caring network. The hope of leaving wardship was a real one but her co-operation and progress were required, he said. “It is in her hands.”