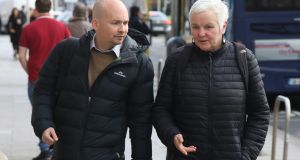 Four TDs have secured permission from the High Court to bring a challenge against the Ceann Comhairle’s decision not to allow a vote on changing Dáil standing orders to stop the Government blocking opposition Bills.

The four TDs are challenging a refusal by the Ceann Comhairle on Monday to place a motion submitted by Ms Smith for the order paper of Dáil Éireann.

The motion seeks to prevent the Government from blocking opposition Bills by withholding a “money message” necessary to allow them to proceed through the legislative process – even when they have been voted for by the Dáil.

The TDs sought to have the motion debated by the Dáil on Wednesday afternoon.

Mr Justice Simons said that, while he was not making any findings in relation to the serious constitutional issue raised by the TDs, he was satisfied that the threshold arguably had been met.

However, the judge said that he was not prepared to grant a temporary injunction requiring the Ceann Comhairle to suspend the effect of his refusal and to restore the motion to the order paper.

The judge said he was not granting the interim order over concerns about the separation of powers between the courts and the Oireachtas.

The judge said the Dáil had voted on the order of business for Wednesday, which did not include the motion submitted by Deputy Smith. He was not prepared to make any order that would interfere with that.

The judge also said that the matters raised by the four TDs were “clearly urgent” and should be heard as soon as possible. The matter will be mentioned before the courts on Thursday, with a view to fixing a date for the full hearing of the action.

The case arises out of attempts to bring forward their bill seeking to change Dáil rules to allow more opposition bills to pass.

The TDs argue that over 50 Opposition bills have been blocked by the Government, which has used a Constitutional provision that only the Government can progress bills which have a potential financial impact on the State’s finances.

Represented in court by John Rogers SC, the four TDs seek orders including one quashing a decision made by the Ceann Comhairle on Monday to refuse to place a motion submitted by Deputy Smith on the Order Paper of Dáil Éireann.

They further seek declarations that the refusal breached their constitutional rights and their rights under the European Convention of Human Rights.

Mr Rogers told the court that it was his client’s case that the Ceann Comhairle’s decision had the effect of preventing a debate in the Dáil, which was of profound importance to them.

The decision, he said, meant they had permanently lost the chance to have the issue debated in the Dáil.

Counsel said the case made out by his client was one which raised the “extreme circumstances” where the courts should seek to interfere with a decision of an office holder of the Oireachtas.

His clients, counsel said, had “no other remedy” against the Ceann Comhairle’s decision other than seeks an order from the courts.

Conleth Bradley SC for the Ceann Comhairle said that the TD’s application was “misconceived” and was not something that can be considered by the courts.

What the four TDs are seeking, counsel said, was in breach of Article 15.10 of the Irish Constitution, which states that “each House shall make its own rules and standing orders, with power to attach penalties for their infringement”.