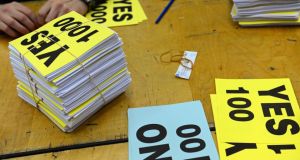 A man seeking to overturn the same sex marriage referendum result has argued the State, in advocating a Yes vote, failed to protect the family, the “special position” of women in the home and the “God factor” in the Constitution.

The Constitution requires the State to protect the family as an institution based on marriage between a man and woman for the purpose of having children but the State failed to do so in proposing a constitutional amendment allowing for same sex marriage, Gerry Walshe submitted to the Court of Appeal.

The three judge Court of Appeal has begun hearing Mr Walshe’s appeal against the High Court’s refusal to grant him permission to bring a petition challenging the Yes result of the May 22nd referendum.

Opening his appeal, Mr Walshe, an electrician of Lisdeen, Co Clare, said he is “not anti-gay” and has gay friends but was concerned the electorate was not adequately informed about the referendum proposal prior to voting in the referendum.

Mr Walshe said he is “a gentleman of Ireland” who was bringing his application as “the voice of the people” and as a person affected by unconstitutional behaviour or organs of the State.

He had sought but not secured information about the funds spent on the Yes campaign, he also argued. Various media reports suggested millions of euros were provided by various bodies to secure a Yes result, he submitted.

He referred to the constitutional recognition of the special position of women in the home and argued Article 41 recognises the family as based on marriage between a man and woman for the purpose of having children.

The family is the main structural support of society and the State was not entitled to remove mothers and children from that structure without first conducting extensive studies as to the impact of that, he said. The State respondents have failed to show the referendum is in the best interests of the people.

He told the court he believed the electorate was unduly affected by the alleged unconstitutional behaviour of the State respondents and were not adequately informed about the proposal. He also believed the support for the referendum from the Garda Representative Association compromised the democratic process and materially influenced the outcome.

He also argued he was denied ample time by the High Court to review some 1,000 documents related to the referendum campaign.

A separate appeal Mr Maurice Lyons, with an address at Callan, Co Kilkenny, against the High Court’s refusal to grant him permission to bring a petition challenging the referendum outcome is due to be heard later on Thursday.