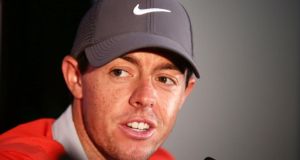 Golfer Rory McIlroy deliberately “wiped clean” up to eight mobile phone and electronic devices even though they may have contained important information relating to his legal action against his former sports management company, it was claimed today. Photograph: Matt King/Getty Images

Rory McIlroy deliberately “wiped clean” up to eight mobile phones which may have contained important information relating to his legal action against his former sports management company, it has been claimed at the Commercial Court.

This “factory resetting” of phones, which it is claimed was also done to devices of three other key figures in the case, including the golfer’s father Gerry, seemed “incredible for a person in his position”, senior counsel Paul Sreenan said.

Mr Sreenan was opening a High Court application by Dublin-based Horizon Sports Management and two other companies, seeking orders for further disclosure of documents and inspection of the phones of Mr McIlroy and of others in advance of the hearing of the golfer’s legal action and the defendants’ counter-claim.

Mr Sreenan said his clients had to bring the application because Mr McIlroy had failed to respond to requests for disclosure of material on phones he had had between 2011 to 2014, including upgrades to the latest iPhone model.

Mr McIlroy, in an affidavit sworn in Palm Beach, Florida, said he has already provided significant amount of detail for the case in compliance with a previous court order.

He said he had not been advised it was necessary to back up material before factory resetting his phones which he changed regularly to have the most up-to-date model.

He used the internet-based “iCloud” storage system to transfer material from one phone to another but he factory reset the phones before changing them to preserve his privacy and to avoid unsolicited calls from journalists.

Mr McIlroy is suing Horizon, along with Gurteen Ltd, with a registered address in Malta, and Canovan Management Services, also based in Dublin, claiming a representation agreement signed by him in December 2011 is invalid and unenforceable on grounds including alleged undue influence.

The defendants deny the claims and have counter-claimed for some US$3 million (€2.4m) allegedly outstanding under the agreement for off-course revenues.

Mr Sreenan, for the defendants, said the amount of lost commission to his clients is now estimated at $9m.

Mr McIlroy, in his action, said Horizon charged commission “many times greater” than is standard in the sports agency industry including one agreement in which he must pay 20 per cent of his sponsorship and 15 per cent if the contract is renewed after 2017.

This agreement was entered into when he was 22, with little business expertise and without the benefit of legal advice, he said. The defendants say he freely entered the agreement.

Opening the defendants’ application , Mr Sreenan said in order that their case is not prejudiced, they were seeking to get the phones to have them forensically inspected by their experts.

A review of material on the phones by carried out on Mr McIlroy’s behalf by accountants KPMG was not forensic, he said. The files being sought include ordinary text messages, “What’s App” messages and material on the “cloud”.

Mr McIlroy had given no satisfactory explanation for the destruction of electronic data on his devices, counsel said.

It was a very serious matter for the administration of justice where someone involved in court proceedings had failed to preserve material, he said.

Mr McIlroy had initially claimed he had a “high turnover of devices” because of his “transient lifestyle”.

His affidavit appeared to blame his lawyers for not telling him he had to preserve data but he knew he should have done so because he own legal team had sought the same preservation of material from the defendants, counsel said.

“It is beyond dispute, in our submission, that data has been deliberately destroyed”, counsel said.

Michael Cush SC, for Mr McIlroy, said he wanted to make it clear his client had done nothing wrong. There was nothing unusual in him having a number of phones over three years or for him to change his number to protect his privacy.

He did the most basic amount of transferring material from one phone to another and deleted the remainder , counsel said. The material involved all pre-dated the legal proceedings, counsel also said.

To assert there was some sort of conspiracy between Mr McIlroy and others in this case “bore no scrutiny”, he said.