Portuguese road workers must be paid €418,000 in month 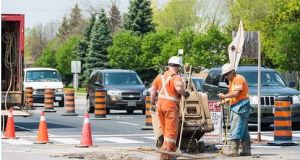 A total of 27 Portuguese workers who worked in Ireland on a road project must be paid some €418,000 within a month, it has been ruled. File photograph: Getty Images

A total of 27 Portuguese workers who worked in Ireland on a road project must be paid some €418,000 within a month as a condition of a stay, pending a limited appeal, on a High Court decision their employment contracts were breached.

If the three Portuguese companies, which traded here as the RAC Eire Partnership, lose their appeal, the 27 workers will be entitled to total payments of almost €1 million net (including the €418,000), plus interest.

Mr Justice David Keane ruled last month the workers were entitled to those payments, plus interest of 8 per cent, over breach of their employment contracts.

He found there was underpayment of wages, plus wrongful deductions for “deplorable” accommodation, “benefits in kind” and laundry.

There should be no “race to the bottom” where workers’ rights are concerned, he stressed in his decision. Proceedings by 23 other workers remain on hold pending the outcome of the cases involving the 27.

When the cases of the 27 returned before the judge on Friday, he awarded costs of the 16-day High Court hearing to the workers and refused to stay that costs order.

Feichin McDonagh SC, for the defendants, sought another stay, pending appeal, on the court’s judgment in the case and said his side was prepared to pay the workers €180,000 within 28 days if the stay was granted.

David McGrath SC, for the workers, argued they should get more than €418,000 given there was no indication so far of any appeal against the court’s finding of wage underpayment and wrongful benefit-in-kind deductions.

Counsel said it appeared the appeal concerns the 8 per cent interest charge and whether the judge correctly ruled the companies were not entitled to make any deduction from pay towards the costs of the accommodation provided for the workers.

The defendants appeared to be saying they should be entitled to some deduction for the accommodation, whatever its nature.

Mr McDonagh said the appeal may not be confined to those issues.

The judge granted a stay provided the defendants pay the workers, within 28 days, the sums sought by their lawyers, totalling more than €418,000.

RAC Eire was a contractor or sub-contractor to a consortium, Bóthar Hibernian, comprising three companies - Mota-Engil (Portugal), Michael McNamara and Company and Coffey Construction Ltd - which won the public works contract for the N7 Nenagh to Limerick dual carriageway.

The judge found the defendants engaged in “systematic and deliberate” underrecording of work hours, leading to underpayment of the workers, and were not entitled to deduct €520 monthly for accommodation of a “deplorable, even dangerous” standard.

The workers were entitled to recover the full sums of underpayment of wages, plus sums deducted for their accommodation, laundry and for “benefits in kind”, plus interest, from the date of their cause of action to now, he ruled.

There was information suggesting some €3 million was due to between 160 and 180 of the defendants’ employees, but the judge added he considered that underpayment calculation “conservative”.