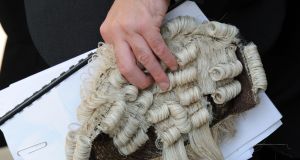 On Monday, a five-judge Supreme Court reserved judgment on the child’s appeal over the High Court refusals. Photograph: Frank Miller

A mother whose Irish-born child has a severe form of sickle cell disease, a blood disorder, was so “desperate” she resorted to prostitution for a time to fund his medication, the Supreme Court has heard.

If deported to her native Nigeria, the mother fears her son, now aged eight, will be seriously adversely affected due to the quality of treatment available in Nigeria and her inability to pay for it, including blood transfusions.

In an affidavit, she said she was so desperate she evaded deportation and resorted to prostitution for a time to fund his €140 monthly medication costs.

The boy was born two months after his mother came to Ireland in 2009. After a deportation order was made in 2011, she evaded it and later took three legal challenges. The mother and child were accommodated by the State from 2014 and provided with a medical card under which the child’s treatment is funded.

Arising from the third judicial review, the High Court refused leave to appeal or to restrain deportation.

On Monday, a five-judge Supreme Court reserved judgment on the child’s appeal over the High Court refusals.

A core issue is a claim by the boy’s lawyers that the child is entitled to benefit from an alleged scheme being operated by the immigration authorities based on recommendations of the working group report on the protection process that migrants here for five years and with no criminal record be permitted to stay.

Counsel said Brian Burns, solicitor for the child, had stated his experience was that the scheme or practice as alleged is being operated without being declared. Lawyers in the High Court’s weekly asylum list colloquially refer to the alleged scheme as “the scheme that doesn’t exist”, counsel added.

A second core issue concerns whether the child’s medical condition is so critical that relevant provisions of the European Convention on Human Rights apply and he should be permitted to remain.

In medical reports, a doctor said the boy has a severe form of sickle cell disease which had led to multiple admissions to hospital, two for life-saving blood transfusions. He would not get the same quality of treatment in Nigeria and is receiving treatment here monthly.

Mr Conlon argued his health situation is so serious the child meets the legal test of exceptional circumstances requiring he be permitted to remain here.

While it was argued the situation in Nigeria is improving, he said the real difficulty was the mother’s difficulty in paying for treatment and access to blood supply, causing concern the boy’s life will be shortened or at risk.

Opposing the appeal, Nuala Butler SC, for the Minister for Justice, said it was a “sad” case but the boy’s situation was not “so extreme” or exceptional he was entitled to succeed. This case was not about “just one little boy” and, if he succeeded, it had implications for others who could advance similar claims.

The test is whether deportation would result in serious rapid irreversible decline resulting in intense suffering and that test has not been met, she argued.

The Minister was not obliged to have a policy as alleged, and the fact there may be a trend or approach towards people here over five years does not mean a policy is being applied unless it crystallises to the point where the Minister decides there should be a policy, she said. The child’s lawyers had asked his case be considered under the recommendations of the working group whose report was not a formal policy but a recommendation.

There is a statutory discretion to be exercised on a case by case basis having regard to the facts, she argued.