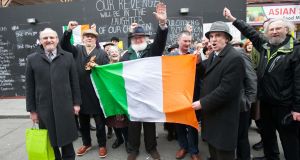 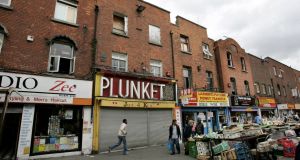 Number 16 Moore Street, Dublin, one of the properties being preserved as part of a 1916 commemorative quarter. Photograph: Dara Mac Dónaill/The Irish Times 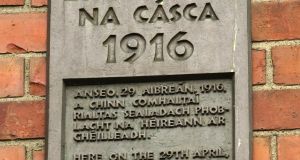 Commemorative plaque at 16 Moore Street where republicans decided to surrender towards the end of the 1916 Rising. Photograph: Frank Miller/The Irish Times

A High Court judge has granted declarations that various buildings and locations in and around Dublin’s Moore Street are a 1916 Rising “battlefield site” comprising a national monument.

The Easter Rising was “unique” and the GPO occupied an iconic position in Irish history, making what happened to the men and women who fled from the GPO when it was ablaze “a matter worthy of unique commemoration”, Mr Justice Max Barrett said.

The Moore Street battlefield site, as the place to where the rebels fled, battle was done, surrender negotiated and where “workers, civilian and combatant, lived and died in what to no little extent was a workers’ rising”, was “uniquely worthy of commemoration”, he said.

Some of the buildings are due for demolition as part of a major development by Chartered Land.

The judge made orders against the Minister for Heritage restraining demolition or unauthorised works to Nos 13-19 Moore Street but he said that once the Minister decided how best to proceed in light of his judgment, she may apply to vary these orders.

The Minister’s position was disputed by Colm Moore, a nominee of the 1916 Relatives Association, in his proceedings against the Minister. Mr Barrett visited the area late last month before hearing the case.

In his 400-page judgment, he set out links between the Rising and the buildings and locations at issue. These included No 10 Moore Street, where Nurse Elizabeth O’Farrell helped treat several members of the Provisional Government, including the wounded James Connolly, in the retreat from the burning GPO on April 28th, 1916.

The judge noted some republicans spent much of that night smashing through walls of houses on Moore Street to create a line of passage from one end of the block to another. Connolly was later brought through those holes to No 16 where he participated in the rebels’ last council of war.

The O’Rahilly was also wounded while leading rebels up Moore Street and died on what is now O’Rahilly Parade. The bodies of four or five civilians shot by the British, at least one under the white flag, lay on the street overnight and anecdotal evidence suggested Patrick Pearse’s decision to surrender may have been influenced after seeing those civilian dead, the judge said.

Perhaps most poignant of all the civilian deaths were those of two children, he added.

Given the “wealth of evidence” before him, including from historians and architects, he granted declarations that various buildings and locations on and around Moore Street, as well as Nos 14-17, comprised a national monument.

The judge said a September 2011 letter from then National Museum Director Pat Wallace to the then minister for heritage also favoured a battlefield site approach. Dr Wallace, whose views were endorsed in April 2012 by Séamus Lynam, acting director of the museum, was “eager to avoid past errors of preserving our national archaeological and historical heritage”.

Faced with “powerful observations” relating to a battlefield site, there could be no doubt the streetways and alignments of the Moore Street “theatre of conflict” satisfied the criteria in the National Monuments Act for being national monuments, the judge said.

The Minister’s side repeatedly noted Nos 14-17 cost €4 million to buy and will take €6 million to refurbish but, while it seemed cost was a significant consideration in the State’s approach, no costs criteria are applicable when identifying a national monument, he said.

He also directed a large vinyl banner fixed to the facade of the terrace at Nos 14-17 be taken down due to being unauthorised development.