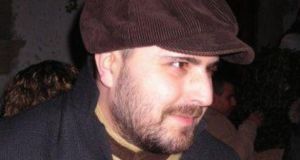 Saverio Bellante (38) was found not guilty by reason of insanity of the killing of Tom O’Gorman (39) at his address in Castleknock, Dublin, in January 2014.

A medical negligence action by Saverio Bellante, who is in the care of the Central Mental Hospital after being found not guilty by reason of insanity of the killing of his landlord in Dublin, may be unable to proceed following a High Court ruling.

Mr Justice Richard Humphreys ruled there was no good reason to further extend time to serve Mr Bellante’s personal injury summons on a psychiatrist and the HSE after it expired on June 19th last.

If it was sought to serve the summons on foot of a renewal order granted by the Master of the High Court on June 14th, the judge said his own judgment should be provided to the defendants. There was an issue whether the Master, rather than the court, could grant the further renewal, he said.

His ruling is open to appeal.

Mr Bellante (38) was found not guilty by reason of insanity of the killing of Tom O’Gorman (39) at his address in Castleknock, Dublin, in January 2014. He remains in the Central Mental Hospital.

His trial heard Mr Bellante, who was renting a room in Mr O’Gorman’s home, told gardai he stabbed him during a chess game and ate what he believed to be his victim’s heart but which turned out to be his lung.

The trial also heard, three days before the killing, Bellante was taken off anti-psychotic medication, which he had been taking since 2005 when he had a breakdown in Italy which led him to believe he was Jesus Christ.

Solicitors for Mr Bellante had on January 8th 2016 issued a personal injury summons alleging negligence against a psychiatrist and the HSE. There was then a year to serve the summons on the defendants but it was not served within that time.

After that summons expired on January 7th 2017, the Master of the High Court was asked, and agreed, to renew the summons for six months. The renewed summons was due to expire on June 19th 2017 but on June 14th the Master was asked to further renew it and he purported to do so.

According to solicitors for Mr Bellante, the Master expressed the view it was for the High Court, rather than him, to grant the further extension. In those circumstances, the solicitors also applied to the High Court on January 20th to renew the summons.

In his judgment refusing that application, Mr Justice Humphreys said, taking the account of what the Master said at face value, it seemed “perplexingly contradictory” for the Master to then purport to renew the summons.

He was told by counsel for Mr Bellante his solicitors have a medical report stating he has capacity to give instructions, the judge noted.

He ruled that “no good reason” had been shown for the failure to serve the summons on the defendants.

While it was argued the summons was not served due to the “complexity and nature of the claims” in the case, and because an inquest into Mr O’Gorman’s death was pending, those matters “do not remotely” come within the scope of the “good reason” envisaged in the relevant court rule.

The coroner is not concerned with issues of legal liability, especially not downstream issues such as whether alleged negligent treatment of Mr Bellante caused him to kill Mr O’Gorman, he said.

The notion Mr Bellante’s claim cannot be particularised “rings hollow” given the level of detail in the 19-page personal injury summons, he also said.