Man who smashed TV with axe believed Holocaust was a hoax 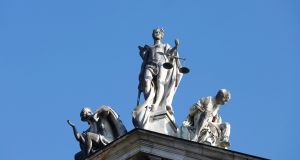 A man who was putting on a “conceptual art performance” in the middle of Ennis, claiming the Holocaust was a hoax, has been sent to jail.

The offences took place at lunchtime on January 23rd when Mulqueen put an axe through a television at the Daniel O’Connell monument in Ennis town centre.

In evidence at Ennis District Court, Mulqueen told Judge Patrick Durcan: “I never realised you could get arrested for swinging an axe into your own TV.”

He said the performance art show, entitled Liberation of the Mind, was carried out to launch International Holocaust Hoax Day.

Sentencing him, Judge Durcan said Mulqueen “may have a view and an interpretation of history, but it is an historical fact that the Holocaust was the greatest crime perpetrated against a section of mankind in the history of mankind”.

By his actions, he said, Mulqueen “behaved in the most offensive way, not merely towards a particular section of society but towards society generally”.

He added: “I am only surprised that he has not been charged with other offences.”

Mulqueen’s solicitor, Patrick Moylan, said his client was “ not in any way racist and has no problem with the Jewish community. His views are based on something he has read and now believes and he created a work of art on the back of that”.

Gardaí were monitoring the event through CCTV and moved in to arrest Mulqueen after he smashed the TV.

Mr Moylan said his client “was taken aback” to be arrested in the first place. He said Mulqueen was single with no children, had no previous convictions and was on social welfare after previously working in Dublin as a taxi driver.

In his statement to gardaí, Mulqueen said: “I found out that the Holocaust was a hoax in August 2013 after coming across a video by David Cole on Auschwitz on YouTube.”

He added: “I am not a racist but I have found out that the Holocaust was a hoax and I wanted to highlight this.”

After sentence was imposed, Mulqueen was released on bail pending an appeal to the circuit court.