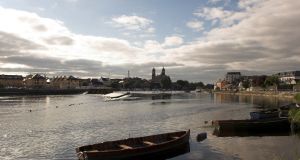 A man who bought two cruiser berths on a River Shannon marina in Co Westmeath, which turned out to be ‘useless’, has been awarded more than €59,000 damages in the High Court. Image: iStock.

A man who bought two cruiser berths on a River Shannon marina in Co Westmeath, which turned out to be “useless”, has been awarded more than €59,000 damages in the High Court for breach of contract.

Michael Begley bought the two 12m berths “off the plans” in 2005 for €40,000 each at the Jolly Mariner Marina Village, Brick Island, Coosan Road, Athlone. He also bought two apartments in the marina which were not subject of dispute.

The Marina Village was part of a mixed residential, retail, and marina development by Damesfield Ltd and was on part of the waterway owned by John Lally.

Mr Begley owns a 11.5m cruiser and other small pleasure craft. He claimed his vessels cannot access the marina berths on account of the presence of a large rock outcrop close to the pontoon bedrock.

He sued Damesfield, Mr Lally and the Jolly M Management Company which managed the marina. He claimed, among other things, breach of contract and breach of convenant for quiet enjoyment.

His claims were denied.Ms Justice Marie Baker awarded Mr Begley €59,289.26 in damages jointly and severally against Damesfield and Mr Lally and said no claim was established against the management company.

She said that on top of the €40,000 purchase price of the berths, he paid €2,400 each in stamp duty “both of which are now useless for purpose”. It was accepted that these were “Celtic Tiger” developments and purchases, she said.

A reasonable current value for each berth would be €15,000, she said.

The award also includes €5,467 paid for service charges for the berths and some €19,000 Mr Begley had to spent on rent for an alternative berth.

While Mr Begley made out a claim for breach of contract, his other claims, including for nuisance and breach of convenant, did not succeed, the judge said.

Mr Begley had sought on order that Damesfield and Mr Lally make the waterway navigable but he had accepted during the case that could not be reasonably achieved, she said. Therefore his claim lay in damages.

She was also persuaded by expert evidence of a local boat surveyor who said one would be “relying on luck” to access the berths without damaging the vessel.