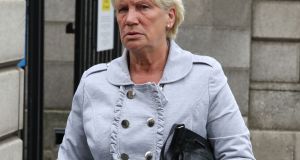 A woman who was injured when a taxi collided with a Luas tram in which she was travelling at a junction in Dublin city has been awarded €80,000 by the High Court.

The award to 63-year-old Margaret Keating includes €10,000 for aggravated damages. Mr Justice Kevin Cross said he believed Ms Keating to be a truthful witness who did not in any way exaggerate her complaints.

Ms Keating had sued the driver of the car, a taxi driver. She claimed he ran a red light and caused an emergency on the Red line Luas tram in which she was travelling. The accident happened at the junction of Stevens Hill, approaching Heuston Station, on June 15th 2016.

She said she was sitting at the back of the tram, hit a support bar in the accident and suffered injuries to her neck and shoulder.

In his judgment, Mr Justice Cross said, while Ms Keating’s physical injuries are soft tissue in nature, he found, based on medical evidence, she will be left with some ongoing symptoms into the future and indefinitely. He accepted she “has had a nasty time and has had a significant change in her lifestyle.”

Ms Keating, Bluebell Road, Bluebell, Dublin had sued taxi driver Martin Mulligan, Leixlip, Co Kildare over the accident. She claimed the taxi driven by Mr Mulligan went through a red traffic light and collided with the Luas which was going through the junction on a green light.

She alleged, as a result of the accident, she developed a travel anxiety and now has a fear of travelling on trams and trains.

Mr Mulligan denied Ms Keating suffered injury as a result of the accident.

In his judgement, Mr Justice Cross said the taxi driver’s legal team had applied to have the case dismissed on grounds including that Ms Keating had not referred to a 2017 accident in replies to particulars and had allegedly withheld the GPs report from the defendants until June 2019. Mr Justice Cross said the 2017 accident was irrelevant to the injuries the subject matter of this case. He said there was no intention to deceive.

In finding Ms Keating was entitled to aggravated damages, he held she did not swear any false or misleading evidence concerning her injuries.