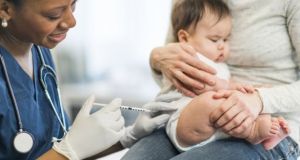 The High Court has dismissed a challenge brought over the HSE’s award of a contract worth up to €28 million for the supply of 6-in-1 vaccines.

The HSE’s decision last January to award the five-year contract to GlaxoSmithKline (GSK) was automatically suspended by the issuing on February 2nd of legal proceedings by an unsuccessful tenderer, Sanofi Aventis Ireland Ltd, trading as Sanofi Pasteur.

The contract, worth between €22 million and €28 million, concerns the supply, over about five years, of about one million doses of the 6-in-1 vaccine.

The HSE applied to the court to have the automatic suspension lifted and sought an urgent hearing of the matter.

On Friday, Mr Justice Denis McDonald ruled in the HSE’s favour on almost all grounds.

Sanofi challenged the methodology employed by the HSE in evaluating tenders and claimed there was a failure to provide reasons for its decision.

It also claimed there had been a breach of the principles of equal treatment and transparency.

The HSE stood over the tendering process.

It also said the implications of any disruption in the supply of the vaccine would be “extremely serious”, including increased risk of the diseases currently preventable by the vaccine.

Lead in time for production of vaccines is around 12 months and if new supplies were not ordered by March 1, 2018, there will “simply be no guarantee of supply” in March 2019, the HSE claimed.

Mr Justice McDonald found Sanofi had been provided with sufficient reasons for the decision except in relation to two sub-sub-categories concerning the scoring system for awarding the contract.

He did not however consider it appropriate or proportionate to quash the decision on that ground alone.

He rejected claims the Sanofi tender was treated in a discriminatory manner or that any undisclosed criteria and weightings (in making assessments) had been applied.

He found no principle of transparency had been infringed.

He did not agree that certain scores awarded by the HSE Product Evaluation Group (PEG) in relation to certain matters were vitiated by manifest error.

However, he commented there was “a remarkable paucity” of records of proceedings by the PEG and said it was highly undesirable a body such at the PEG should proceed to reach decisions “with so little by way of written record”.

He adjourned the question of costs to next month.