Legal challenge against Trump wall in Doonbeg put on hold 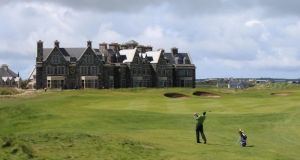 An environmentalist’s High Court challenge against planning permission granted to build a sea wall at Donald Trump’s golf club at Doonbeg in Co Clare has been put on hold pending a decision on the development from An Bord Pleanála.

Peter Sweetman brought a challenge against Clare County Council’s decision last December to grant planning permission to build a sea wall to stop part of the course at the Doonbeg Golf Club being eroded by the Atlantic Ocean.

The local authority granted approval for the plan despite opposition from An Taisce, Friends of the Irish Environment (FIE), the West Coast Surf Club and others.

The plan — which involves building a 38,000-tonne rock barrier to protect three holes at the course “as a matter of urgency” — had the backing of the local community in Doonbeg.

Mr Sweetman secured permission from the High Court to legally challenge the grant of planning permission and also put a stay on any appeal before An Bord Pleanála.

His case is against Clare Co Co, while Trump International Golf Links Ireland Enterprises Ltd, An Bord Pleanála and the Department of Culture, Heritage and the Gaeltacht are all notice parties.

However, the parties have agreed to adjourn the action and lift the stay to allow An Bord Pleanála consider an appeal against Clare Co Council’s decision.

A condition of the parties agreement is that An Bord Pleanála will not issue any determination on the appeal before October 15th next.

The case was briefly mentioned before Mr Justice Donald Binchy at Wednesday’s vacation sitting of the High Court.

The Judge adjourned the case to a date in October, for mention only.