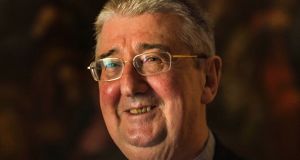 Judges and lawyers, along with politicians, have an “essential” role to play in ensuring social equality, the Catholic Archbishop of Dublin has said.

“A political or judicial system which betrays or undervalues the equality and the dignity of all betrays its calling and betrays humanity,” Archbishop Diarmuid Martin said during the homily at the annual mass at St Michan’s Catholic church in Dublin to mark the opening of the new legal year.

The Archbishop’s address was to a congregation including the Attorney General, Máire Whelan, senior judges and lawyers, visiting judges from Northern Ireland, England, Scotland and France, and the Papal Nuncio, Archbishop Charles Brown.

His homily focussed on the importance of communication and warned, when communication breaks down within the human communuity, selfish interests begin to dominate.

“Growth with equity will never be fostered when the few are favoured and others are left on the margins and excluded. We need a new language of communication within society where every individual can attain voice and ownership in dignity in which all have a sense of being treated and respected in the depth of their personal identity.”

When the common good and common purpose do not prevail, a “damaging cancer” can appear leading to communication and participation being replaced by polarisation and marginalisation.

In any society, the legal system is an essential part of this fundamental process of communication, of equitable human interaction, Dr Martin said.

“The task of public authorities is to ensure equity, to protect the weak and curb the arrogance of those who exercise power. A legal system has its role in independently and vigorously ensuring that men and women and indeed children, citizens and not, have equitable access to what they need to realise their God-given potential.”

At the St Michan’s Church of Ireland service to mark the new law term, Reverend Dr Donal Watts, clerk emeritus of the General Assembly of the Presbyterian Church in Ireland, said Christians need to “stand firm” on what they believe.

Christians need to recognise the values of their faith “have the potential to be opposed in society today – a society where too often self is at the centre and greed a powerful motivating force”, he told a congregation including the Chief Justice, Ms Justice Susan Denham.

Christians should not be looking for any privileged position and should indeed shy away from such, he said. “Rather we should be out in the market-place of public opinion arguing strongly, but graciously, for Christian values and sense of self worth. We should be setting an agenda, not simply reacting to one.”

In a society where self-confidence and greed has “too often been a dominant player in our relationships”, where religious practice has at times been debased and dishonoured, where truth gives way to spin, and where wisdom is “often perceived as whatever you can get away with”, there was a need to listen carefully to the message of justice, love and humility, Rev Watts added.