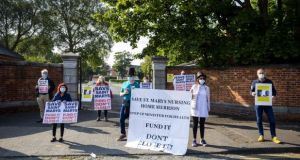 The High Court has dismissed an application to appoint an examiner to a south Dublin care facility for vulnerable adults.

Mr Justice Michael Quinn was not satisfied there was sufficient evidence before the court to allow it to conclude that St Mary’s Centre (Telford) has a reasonable prospect of survival.

The company has for many years operated a disability care facility for persons who are legally blind, as well as a nursing home on a campus beside St Vincent’s Hospital on Merrion Road.

As a result of the judge’s decision, an application will be made later this week to confirm the appointment of insolvency practitioners Neil Hughes and Dessie Morrow of Baker Tilly as official liquidators of the company.

They were appointed on a provisional basis following an application to the court last July by the company for a winding up order. The company sought to wind up the facility, owned by the Sisters of Charity, because it would be unable to meet redundancy payments of €950,000 arising from the liquidation.

The firm also cited regulatory difficulties, concerns over future funding from the HSE and an inability to comply with a health watchdog’s recommendations to modernise its facilities as reasons why it should be wound up.

Lawyers representing some of the care centre’s residents as well as some current and former staff later applied to have the firm put into examinership, even for a short period, to see if the facility could be saved. They claimed an independent expert had, in a report, expressed the opinion the company could be if certain steps are taken, including putting it into examinership.

The company and provisional liquidators opposed the examinership application.

In his judgment, Mr Justice Quinn said the applicants had not made out that the company could be preserved as a going concern. The court was also not prepared in this case to use its discretion to appoint an examiner, even for a limited period.

Information tendered to the court supporting appointment of an examiner was “too general” on issues such as future funding and the long-term survival of the company, and insufficient to merit granting the company protection of the court. The judge noted issues between the HSE and the company about what was said in terms of the centre’s funding.

He also noted that all of the nursing home’s 50-plus residents have left, while 18 of the care centre’s residents remain at the premises.

The HSE had promised to continue to provide funding during any period of examinership or liquidation, he noted. The HSE and provisional liquidators are also in discussions about the HSE taking over the care facility for a transitional period, which could take up to 18 months to complete.

The Sisters of Charity had indicated their support should such discussions be successful, he added.

The appointment of an examiner would not aid that process, and would add to the costs and the complexities of it, he said.