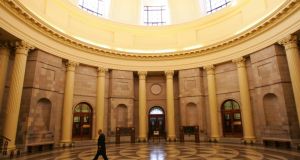 Barrister Ronnie Hudson, counsel for jeweller Des Byrne, Bachelor’s Walk, Dublin, told Ms Justice Carmel Stewart on Thursday the bank had obtained the judgment against Mr Byrne and his son Ken. He said the judgment had been registered in the Central Office of the High Court by Ivor Fitzpatrick, solicitors, St Stephens Green, Dublin, but in the meantime had been set aside by Mr Justice Kevin Cross. File photograph: Bryan O’Brien/The Irish Times

A Dublin jeweller has been refused a High Court injunction restraining Danske Bank and a leading Dublin legal firm with regard to the publication of a €957,000 judgment granted against him.

He said the judgment had been registered in the Central Office of the High Court by Ivor Fitzpatrick, solicitors, St Stephens Green, Dublin, but in the meantime had been set aside by Mr Justice Kevin Cross.

Notice of the judgment had been published by Stubbs Gazette, Schoolhouse Lane East, Dublin, and the Sunday Business Post Limited, Harcourt Street, Dublin, and on SoloCheck.ie.

He said the judgment remained visible on SoloCheck and possibly other websites, but the Sunday Business Post and Stubbs had acted responsibly by offering corrections and apologies.

Jean Madigan, a solicitor at Ivor Fitzpatrick and Co, told the court that in default of appearance the bank had marked judgment against both Des and Ken Byrne.

An application only on behalf of Ken Byrne had been made to the High Court to set aside the judgment, and made no reference to Des Byrne.

Ms Madigan said Mr Justice Cross’s order set aside the judgment as against Ken Byrne only.

There had never been any application made by or on behalf of Des Byrne to set aside the judgment as against him.

Ivor Fitzpatrick & Co had written to the Central Office requesting the removal of publication of the judgment and had received a reply that it had been “Entered in Error”. Her legal firm then informed Ken Byrne that the judgment had been removed.

She said publication of the judgment against Des Byrne was not defamatory in that it had not been set aside and continued to subsist and was true in all material respects.

John E Donnelly, counsel for both Ivor Fitzpatrick & Co and the bank, told the court he was at a loss to know what the notice of motion on behalf of Des Byrne sought to accomplish.

He said publication had already occurred and his clients had no intention of publishing it further and, apart from publication in Stubbs and the Sunday Business Post, who had removed it, they were not aware of it having been published elsewhere. His clients had nothing to do with SoloCheck.

Mr Donnelly said his clients were satisfied they had taken steps to reflect the proper situation. The judgment could not be expunged completely from the record and currently stood marked “Entered in Error”.

He told the court that in order to obtain the reliefs he was seeking, the plaintiff had to show the publication was defamatory and that the defendants had no defence to the proceedings.

“We have at least two defences,” Mr Donnelly said. “We are entitled to plead a defence of justification and a defence of absolute privilege.”

Ms Justice Stewart said the court had not been satisfied that the defendants did not have a reasonable defence to the allegation of defamation.

She refused injunctions restraining publication and directing both defendants to search the internet for any evidence of further and currently unknown publication.