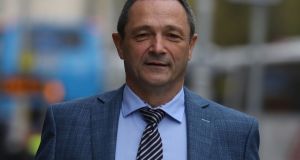 In the apology read in court the IAA accepted it published statements that were unsubstantiated and caused Captain Padraig Higgins (above) upset and reputational damage. Photograph: Collins Courts

The Irish Aviation Authority (IAA) has apologised to an Aer Lingus Airbus pilot for false and defamatory statements in emails which it circulated internally and to its UK counterpart six years ago.

A High Court jury is now being asked to determine damages payable to Captain Padraig Higgins, described in the apology as “a person of high personal and professional integrity.”

The case arose after he was involved in an incident in April 2013 when his single-engine “microlight” aircraft, which he uses in his spare time, had to make an emergency landing on rough ground near Swansea, Wales.

It landed safely but a wheel was damaged when it hit a rock.

Captain Higgins was on his way back with a fellow pilot to Ireland from Exeter in England with his newly acquired aircraft when the incident occurred.

He had ensured before leaving all his papers and licence allowing him to fly in UK airspace were in order.

In his claim alleging defamation, it is alleged that in June 2013 the first of three emails was sent by John Steel, IAA manager of general aviation standards, to three IAA colleagues and to the UK’s Civil Aviation Authority.

The first spoke of “tracking down and contacting” the individuals involved in the incident and checking with gardaí and Revenue whether they had advised of the intended flights and had the required foreign permits.

Mr Steel followed it up with another email saying he understood Captain Higgins’ “microlight rating” was valid only in Ireland.

In July, Mr Steel sent a further email saying “we have a couple of issues to deal with this side of the Irish Sea so the two boys will not be getting away ‘scot free’”.

The court heard Captain Higgins’ papers were fully in order and he had informed the UK Air Accident Investigation Branch immediately of the incident.

He was formally cautioned by the UK Civil Aviation Authority on July 11th 2013, in relation to four alleged offences, the most serious of which was that he did not hold the appropriate flight crew licence.

By July 29th, 2019, all the allegations were rebutted and the Civil Aviation Authority wrote saying there will be no further enquiries “and the investigation will now be closed.”

In the apology read by Oisin Quinn SC, for the IAA, it stated the IAA published several statements in 2013 which it was accepted were unsubstantiated and caused Captain Higgins upset and reputational damage.

It acknowledged he was a person of high integrity who “did nothing to warrant this undesired attention” and also acknowledged his role “in contributing to improvements in air safety.”

It retracted all defamatory statements, “apologises unreservedly for this episode and regrets the length of time it took to reach a resolution.” It also agreed to pay damages and legal costs.

Under the 2009 Defamation Act, where there is no agreement on an offer of amends, a jury is asked to decide what it should be.

After the apology was agreed on Wednesday, the case in relation to damages opened before Mr Justice Bernard Barton and a jury.

Thomas Hogan SC, for Captain Higgins, said as well as being a senior pilot in Aer Lingus, his passion in his spare time is to fly two seater microlights. He is a former vice-chair of the Irish Microlight Association and had a role in establishing the voluntary General Aviation Safety Council of Ireland.

In that role, he dealt with the IAA and that relationship became somewhat strained as the microlight association felt it was being overlooked by the IAA in its campaign for better safety and certification.

Mr Hogan said, after the UK air accident branch said the incident in Swansea was closed, Captain Higgins was confused and suspicious because these unfounded accusations had been made against him and he had made inquiries with the IAA but was “stonewalled”.

However, the UK Civil Aviation Authority was “very forthcoming” and provided him with the information which led to him becoming aware of the defamatory emails.

Counsel said the apology did not come for six and a half years and it was his client’s case the IAA conduct had aggravated the defamation.