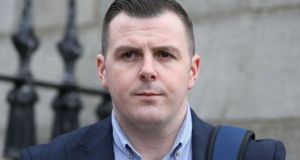 Brian Mohan, from Beaumont, Dublin pictured outside the Four Courts during the opening day of his High Court action. Photograph: Courts Collins

Laws requiring political parties to field at least 30 per cent male and 30 per cent female candidates in the next two general elections if they are to get State funding are “a reasonable course of action to address the historic under-representation of women in Irish politics”, the High Court has been told.

Dr Fiona Buckley, a University College of Cork lecturer specialising in gender politics, was giving evidence for the State in the continuing challenge by Fianna Fáil activist Brian Mohan to the constitutionality of provisions of the Electoral (Political Funding) Act 2012 linking State funding of political parties to their achievement of gender quotas when selecting candidates.

He brought the challenge against the State after Fianna Fáil directed its sole general election candidate in the Dublin Central constituency, where he wished to go forward for selection, must be a woman. That direction came after it emerged last summer that just 10 of 47 candidates then selected by the party were women. Mary Fitzpatrick was selected in October to run in Dublin Central.

The court heard Ireland ranks 86th - with North Korea and the Republic of Korea - of 140 countries worldwide in relation to political representation of women, representing a substantial deterioration since 1990 when Ireland was ranked 37th.

Dr Buckley said statistics on female political representation between 1977-2011 suggest the Irish electorate is not biased against women and women’s under-representation in the Dail is rather linked to the candidate selection process. Women’s candidacy rates were also significantly lower than their party membership rates.

After the political parties selected more women to contest the 2014 local elections, apparently in preparation for gender quota requirements, the percentage of women elected to local government positions rose five points to 21 per cent compared to 15 per cent in the Dáil, she said.

Irish political parties seem more inclined to select women as candidates for “second-order” elections, such as local elections, rather than first order elections, she added.

Since the foundation of the State, just 15 women have held Cabinet positions and those were generally in the socio-cultural area, she said.

Under cross-examination by Michael McDowell SC, for Mr Mohan, she agreed voluntary gender quotas operate in Scandinavian countries which have high participation rates of women in politics compared to many countries including Ireland. Finland has 41 per cent female participation and Sweden 44 per cent, the court heard.

Dr Buckley said those countries have operated such quotas for several decades and women there have historically had greater access to, and participation in, many areas of public life. She considered the higher political participation rates reflected a different and more advanced political culture in those countries.

She said France, which operates financial penalties if parties fail to meet gender quotas, has a female political participation rate of 26 per cent. She agreed female parliamentary representation in the UK is 29 per cent without an underpinning public law mechanism but believed the UK Sex Discrimination Act had facilitated affirmative action by parties on female participation.

Earlier, under cross-examination by Maurice Collins SC, for the State, Mr Mohan accepted he is “fundamentally at odds” with the policy of his own, and every other party in the Oireachtas, on gender quota legislation but believed there was considerable opposition to the laws at grassroots level.

He considered Fianna Fáil was “being held over a barrel” because it would lose half of its annual Exchequer funding of €1.2m unless it meets the gender quota targets. It would be “impossible to function” without that funding, he added.

Mr Mohan agreed women make up 51 per cent of the population, are not “a minority group”, the number of female candidates has never exceeded 20 per cent in any general election here, male TDs make up 84 per cent of the current Dail and his party, as of now, does not have a single female TD.

He agreed low female political participation is “undesirable” but believed it could be improved via, for example, “training days” and the work of the National Women’s Council rather than gender quota laws to which he had a “personal political objection”. He also believed women are represented by the TDs they elect.

In submissions, Mr Collins argued Mr Mohan did not have the required legal standing to bring this “extraordinary” case against the State alleging unconstitutional interference in the internal workings of Fianna Fáil when the party was not making similar claims and had not opposed the 2012 legislation.

That law was necessary given “continuing profound under-representation” of women in the Dail and compliance with it was fundamentally a matter of choice even if the consequences of not meeting the 30 per cent quota may be “unpalatable”.

The Oireachtas has a compelling interest in the regulation of political parties which are the “gatekeepers” for the electoral process, he said. The disputed provisions were “gender neutral and “entirely politically neutral” as they applied equally to all political parties. The election of candidates remains a matter for the electorate and there was no “social engineering” involved, he added.