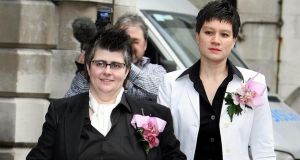 A judge at the High Court in Belfast granted leave for Grainne Close, her partner Shannon Sickles, and Chris and Henry Flanagan-Kane to seek a judicial review of the prohibition.

Mr Justice Treacy ruled that their case had enough merit to proceed to a full hearing based on the papers before him.

He said: “Rather than waste everybody’s time by pretending otherwise, I propose to grant leave which means the applicant has an arguable case.”

Both couples claim the continued ban on them getting married in Northern Ireland breaches their human rights.

They cemented their relationships in civil partnerships at Belfast City Hall back in 2005.

At the time Northern Ireland was the first United Kingdom region to introduce the ceremonies for gay and lesbian couples.

But unlike the rest of the UK, it has still not legalised same-sex marriage.

Same-sex marriage has been rejected four times by the Stormont Assembly, with unionists using a petition of concern to block it.

In court today counsel a barrister for the department of finance and personnel argued that a similar case is currently going through the family division.

Those proceedings relate to a couple who want their marriage in England to be recognised in Northern Ireland.

But Laura McMahon, for Ms Close and the others involved in the judicial review case, confirmed she was seeking to have the legislation completely struck down.

“If successful in this application it provides a total remedy,” she said.

Her challenge is based on claims that the prohibition discriminates against gay and lesbian couples.

The ban breaches entitlements to family life and marriage under the European Convention on Human Rights, it is contended.

Following his decision that an arguable case had been established, Mr Justice Treacy agreed to a further review in September.

It is expected that the legal challenge will be passed over to another judge who is set to hear the Family Division action in November.

Although supporters attended court for the brief hearing, neither of the two couples involved in the case were present.

Their solicitor Mark O’Connor, of Larkin O’Connor Cassidy law firm, said later: “We are disappointed in these times of economic hardship and difficulties in access to justice that the applicants are forced to rely on the courts to ensure our politicians act without discrimination, without prejudice, and without bias.”