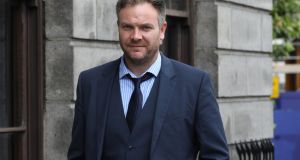 A garda sergeant told a man who had just been pepper sprayed and arrested “you may hit your girlfriend but you won’t hit me”, the High Court heard.

Gerald Jennings (34) is suing the State for wrongful arrest following an incident in Carlow town in which gardaí mistakenly believed he had carried out a vicious street assault on his fiancée Martha Kowalczyk even though he was asleep in her apartment at the time.

Within a couple of hours, the court heard, gardaí had established from CCTV evidence that it was not Mr Jennings but a man called Colvin Keogh (26), The Paddocks, Carlow, who was later jailed for seven years after admitting the crime.

Mr Jennings, a property manager from Carlow, says he was assaulted by gardaí on the night of that attack in Carlow town on December 2nd, 2012, and he suffered serious psychological effects as a result. The Garda Commissioner and the State deny his claims.

Under cross-examination on Friday by Conor Devally SC, for the defendants, Mr Jennings denied he was aggressive when cautioned by gardaí after waking up and asked to go outside his fiancée’s apartment, where he was pepper sprayed in the eyes and arrested for public order offences.

He said when he was on his knees almost blind from the pepper spray, he heard Sergeant Therese Phillips say: “That’s what you get for beating your girlfriend, you dirty scumbag”.

He said around 5.30am, in a cell in Carlow Garda Station, he was told CCTV evidence had shown the attacker was wearing different trousers to him. He said he asked Sgt Phillips, with his sister Catherine Jennings present at the door of the cell, would she apologise for the earlier remark about beating his girlfriend.

He said Sgt Phillips did not deny she had said it, but replied: “You are the real hero, always thinking about yourself all the time”.

He disagreed with Mr Devally that Sgt Phillips did not make the “dirty scumbag” remark but what she had actually said was: “You may hit your girlfriend but you won’t hit me”.

Counsel put it to him that Sgt Phillips also denied she had made the remark he alleged when he sought an apology in the cell. Mr Jennings said she did not deny it and also claimed he had assaulted a garda and “we have it on CCTV”.

The court heard Mr Jennings was never charged with assaulting a garda or with public order offences.

Earlier, he told his counsel Michael McDowell SC, with Mark Harty SC, that night had affected him psychologically in many aspects of his life. He had been diagnosed with post traumatic stress and was on medication for anxiety and depressive disorder.

The court has heard from his fiancée and mother of their three-year-old son, Ms Kowalczyk, about the attack on her outside her apartment in Carlow in the early hours of December 2, 2012, when she had left Mr Jennings sleeping in the apartment to go find a friend who was visiting her that night and from whom she got separated.

As she returned to her apartment, just outside the door, she was savagely attacked and sexually assaulted by Colvin Keogh.

Ms Kowalczyk said after getting assistance from a taxi driver and the arrival of gardaí she refused to go to hospital unless gardaí first checked on Mr Jennings as she feared her attacker might have got her apartment keys and gone up to it. She said she repeatedly told gardaí she did not know who the attacker was.

Mr Jennings, during cross examination by Mr Devally, disagreed when gardaí woke him he was abusive, unruly and shouldered Sgt Phillips leaving the apartment. He said he had no idea what was going on except having been told his fiancée had been assaulted but did not know why he was being cautioned by Sgt Phillips about his right to remain silent.

He agreed he was drunk on the night but disagreed the extent of his intoxication was such that he got into a violent temper when he woke up. He disagreed he charged down the stairs of the apartment block to the street with Garda David Conway chasing after him.

The case resumes on Tuesday before a judge and jury.