Nothing untoward happened during the interview, garda tells court 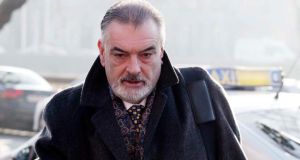 A Garda Detective Inspector has denied he put his crotch up against Ian Bailey’s face during an interview with Mr Bailey at the time of his first arrest in connection with the 1996 murder in west Cork of Sophie Toscan du Plantier.

Det Inspector Michael Kelleher, now retired, is giving evidence in the continuing action by Mr Bailey against the Garda Commissioner and State over the conduct of the Garda investigation into the murder of Ms du Plantier.

Her body was found near Toormore, Schull, on the morning of December 23rd, 1996.

The defendants deny all the claims, including of wrongful arrest and conspiracy to manufacture evidence.

The case has resumed on its 38th day before an 11-member jury as one of the jurors is no longer available.

He became involved in the du Plantier investigation on December 23rd, 1996, and believed the body of Ms Toscan du Plantier was still at the scene that day.

He set up an incident room in Bantry Garda station and delegated different functions to various gardaí.

A jobs book was the “pivot” of the investigation and would set out delegation of all tasks. A questionnaire was distributed house to house and members would be allocated to do that and to deal with the results. A family liaison officer was appointed and there would also be a person delegated to deal with important witnesses.

Members would be paired off and given tasks on a written jobs sheet and the fruits of all that would be recorded, he said.

In any investigation, members will nominate suspects who would be inquired into. There was a stock template for a suspect nomination form. Any material pertaining to a particular suspect would go into the relevant file, the original material would be typed up and those typed copies put on the file as working material.

The original hand-written manuscript material would also be filed.

He believed the decision to arrest Mr Bailey on February 10th, 1997, was probably made the previous day. He was involved in one interview of Mr Bailey along with Det Supt Dermot Dwyer, which began at 8.40pm and continued until 10.05pm.

He said Mr Bailey was asked to tell the truth about the murder of Ms du Plantier and notes were taken. Nothing untoward happened during the interview, he said.

Cross-examined by Tom Creed SC, for Mr Bailey, Mr Kelleher denied he put his foot on the table where Mr Bailey was sitting and put his crotch into Mr Bailey’s face.

When counsel said Mr Bailey had not known the name of the officer who did those alleged acts but now recognised Mr Kelleher as that person, Mr Kelleher said: “I don’t accept that for one second.”

Mr Bailey had seen him several times since that February 1997 interview, he said.

In reply to further questions, he said he believed he was asked to get involved in this investigation because of his experience dealing with serious crime.

He saw the body at the scene and it was obvious this was a violent death.

He believed the then State Pathologist, Dr John Harbison, arrived the following day, December 24th, 1996. There was only one State pathologist at the time and he did not believe there was formally an assistant state pathologist then.

In any event, it would be the State pathologist who would be called and all the Garda technical bureau experts would also be at the post-mortem, he said. He agreed gardai would need to know as soon as possible the cause of death, the nature of the murder weapon and other such matters.

He agreed Dr Harbison was unable to establish the time of death and said this was due to several factors including it being very cold and an outdoor scene.

He agreed Ms du Plantier was last seen on the evening of December 22nd at another house and her remains were found about 10.30am the next morning by her nearest neighbour, Shirley Foster, at Toormore.

Mr Kelleher said he was at the incident room every day. Other senior officers were also heavily involved and, in the new year, officers from Dublin were also present.

Asked was he not the one who knew most about the investigation, he said the other officers would also be “up to speed” on all aspects of it.

He said some members of Ms du Plantier’s family came over to Ireland following the murder.

Her husband did not come, he said.