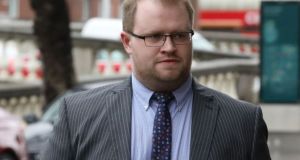 A provincial newspaper editor seeking the quashing of a search warrant forcing him to hand over his phone to gardaí has advanced a “very thin” claim for journalistic privilege, the High Court has been told.

Frank Callanan SC, for the Garda Commissioner, was opposing an action by Emmett Corcoran, editor of the Strokestown, Co Roscommon-based “The Democrat”, over the search of his home and seizure of his phone in April 2019.

The phone was seized as part of a Garda investigation into violence at a house in Strokestown which had been repossessed in December 2018.

Following a tip-off, Mr Corcoran says he arrived at the scene, where a number of vehicles were on fire, before the gardaí and fire services arrived and shot some phone footage he put online.

Before it was seized, Mr Corcoran, who months before the search had invoked journalistic privilege in relation to its contents, had switched it off and refused to provide the PIN. It remains in independent Garda custody with an undertaking it will not be examined pending determination of the court proceedings.

Oncor Ventures, publishers of the paper, and its director and editor Mr Corcoran, are seeking, among other things, declarations that the search warrant issued by District Judge James Faughnan in December 2018 was invalid and should be quashed.

It is claimed the District Judge was not informed Mr Corcoran had invoked journalistic privilege.

The gardaí claimed there was no such privilege “known to law”, the court heard. Mr Corcoran also wants the phone returned. The Garda Commissioner opposes the action.

On Thursday, Mr Callanan, said journalistic privilege, unlike legal privilege, is not absolute.

The arguments on behalf of Mr Corcoran were effectively trying to deflect attention from the assertion of “a very thin claim of journalistic privilege” where it falls far short of the particularity required for the court to carry out a balancing exercise between that privilege and the need to carry out a criminal investigation.

Counsel was not saying Mr Corcoran was not a journalist but was querying whether he had established he was acting in a journalistic capacity on the night of the incident.

It was correct to say the District Judge was not told of the journalistic privilege issue but it was not incumbent on the gardaí to do so during the application for the search warrant, he said.

The function of the District Judge was to issue a warrant where he believed reasonable grounds for suspicion existed, he said.