Family of woman killed by garda in crash awarded €240,000 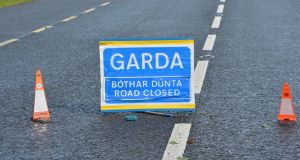 Garda Patrick McDonnell, with an address at Corofin, Co Galway, pleaded guilty at Trim Circuit Court last month to a charge of dangerous driving causing the death of Jacqueline Wolohan (51) on the M4 motorway at Rossan, Kinnegad, on February 13th, 2016.

A widow’s three adult children and elderly father are to receive a settlement of some €240,000 against a garda who admitted dangerous driving causing her death in a road collision.

The High Court’s Mr Justice Garrett Simons said court approval was not necessary for this particular settlement but he made various directions aimed at avoiding any unnecessary delay in its payment out.

Garda Patrick McDonnell, with an address at Corofin, Co Galway, pleaded guilty at Trim Circuit Court last month to a charge of dangerous driving causing the death of Jacqueline Wolohan (51) on the M4 motorway at Rossan, Kinnegad, on February 13th, 2016.

Ms Wolohan was returning to her home in Kilmore, Coolock, Dublin, from Longford when the crash involving her Nissan Micra and the defendant’s Opel Astra occurred.

Three passengers in her car, including her then teenage son Andrew, were injured and all three have taken legal proceedings as a result.

Separately, the deceased woman’s eldest daughter Alison Wolohan, on behalf of herself and the family, had sued Mr McDonnell for damages for wrongful death.

When the matter came before the High Court, Mr Justice Simons had to decide a point of law concerning whether statutory dependants of a deceased, who are of full age and are not under any legal disability, must obtain court approval for a proposed settlement of a fatal injuries claim under Part IV of the Civil Liability Act 1961.

In a judgment delivered electronically on Thursday, he ruled court approval of the proposed settlement agreed between the family and the defendant’s insurer was not necessary in this case.

He said his conclusion highlights an “anomaly” in the treatment of claims compromised on the basis of parties agreeing to an assessment made by the Personal Injuries Assessment Board and claims which are compromised on some other basis.

He said court approval is always necessary where intended parties agree to accept a PIAB assessment but, in all other circumstances where there is agreement between the dependants, court approval will generally only be required if one or more dependants is a child or otherwise under a legal disability.

The court must also be satisfied that all statutory dependants are on notice of the proceedings and have given written consent to the terms of settlement.

Because Alison Wolohan had asked the court to make directions, the judge made certain orders to avoid any unnecessary delay in the payment out of the settlement.

The settlement is to be divided in various sums as agreed between the children and their grandfather.

It includes the statutory maximum sum of €35,000 for mental distress which the judge directed should be divided equally between all four.

The judge noted, at the time of Mrs Wolohan’s death, her two younger children, Sarah and Andrew, were financially dependent on their mother who provided accommodation, care and support to them. Mrs Wolohan had also provided care for her elderly father.

It was to “her great credit” that Alison had undertaken responsibility for the care and financial support of her younger siblings and her grandfather, the judge said.

Alison had brought her brother Andrew to live with her in her home and she also supervised the care of their grandfather.