Family of man who fell into hole after wedding awarded €147,000 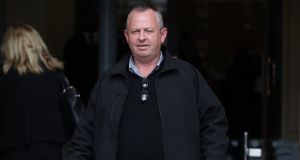 Pierse McBride, of Middletown, Derrybeg, Co Donegal, took an action on behalf of his family over the death of his father in 2007. Photograph: Collins Courts

A family has secured a €147,000 settlement over their father’s death hours after his daughter’s wedding as a result of falling into an excavated hole on a road just 200 yards from his Co Donegal home.

Patrick McBride (69), a father of eight, was on his way to buy drink for locals in Gweedore who had not been at his daughter’s wedding, a local custom, when he fell into the hole.

He could not get out because, it is believed, his arms were trapped under his body and he died.

Proceedings were initially brought by his widow, Grace, against Donegal County Council and Eircom Ltd and Eircom PLC over the accident on September 23rd, 2007.

Following Grace’s death, her son Pierse McBride, of Middletown, Derrybeg, Co Donegal, took over the action on behalf of the family.

The defendants denied liability and the case settled for €147,000 without admission of liability.

In the action, it was claimed a danger had been created on the road and there was alleged failure to complete the works. It was also claimed there was failure to have adequate street lighting, to fence off the excavation and put warning signs in place.

The claims were denied and it was contended there was contributory negligence on the part of Mr McBride in relation to the accident.

Joseph McGettigan SC, for the family, said it was a tragic case.

Mr McBride had been dropped home from the wedding after midnight and went to walk to his local pub but fell into a large hole excavated by the council for the purpose of erecting signage.

Liability was contested and it was a great concern to the family that the other side pleaded there was contributory negligence due to alleged intoxication, counsel said.

A coroner had ruled out intoxication as a factor in the case and Mr McBride’s death was recorded on his death certificate as due to misadventure, he said.

Approving the settlement, which included €6,000 for loss of a honeymoon for Mr McBride’s daughter Grace Anne, Mr Justice Kevin Cross sympathised with the family on their dreadful loss.

Outside court, the family’s solicitor, Pat McMyler, said they were very upset at the circumstances of Mr McBride’s death and that their mother did not live to see the case resolved in court.

He said the family had not taken the case for compensation but to vindicate the good name of their father and it was the family’s hope their parents could now rest in peace.