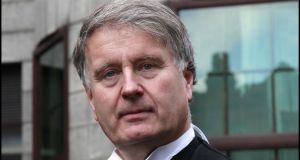 The family of a man who was allegedly struck by one car before being hit by another as he lay injured, has settled its High Court action for €300,000.

It was alleged the alleged actions of the drivers of the two cars caused the death of Wayne O’Neill (40), a father of one from Cloneen, Clough, Castlecomer, Co Kilkenny.

Vincent Foley SC told the judge that Mr O’Neill was walking along a road at night at Clonbrock, Crettyard, Co Carlow on January 21st, 2017.

It was alleged the actions of the two drivers caused the wrongful death of Mr O’Neill who, it was claimed, was struck by the first car and then hit by the second car while he was lying on the road.

His widow, Lisa Walsh O’Neill, of Townspark, Athy, Co Kildare, had, on behalf of her family, sued the driver of the first car - Julieanne McMulkin, Franarns, Crettyard, Co Carlow - and the driver of the second car, Stephanie Wilkinson, Oakhill, Castlecomer, Co Kilkenny.

It was claimed both drivers had caused their vehicles to be involved in a collision with Mr O’Neill. It was further claimed they failed to keep a proper look out and allegedly drove without due care and attention.

It was further claimed against Ms McMulkin that she allegedly drove away from the scene, leaving Mr O’Neill seriously injured.

The judge offered his sincere sympathy to the O’Neill family.