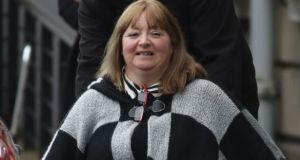 Marie Daly pictured last March at the Four Courts. Her case will now have to be fully reconsidered by the Labour Court. Photograph: Collins

A special needs assistant now paraplegic following a road accident has won, by a four to one majority, her Supreme Court appeal over a decision she cannot return to work at a special needs school.

Marie Daly’s case will now have to be fully reconsidered by the Labour Court in line with the Supreme Court findings, including that the Labour Court, when holding in her favour, “selectively” considered core evidence of an occupational therapist.

The Labour Court must now consider the entirety of therapist’s evidence and also consider the school’s consultation with the funding body, the National Council for Special Education, concerning whether funding could be secured for Ms Daly as a “floating SNA”.

It must consider the case in line with the Supreme Court’s interpretation of the duties of employers under Section 16 of the Employment Equality Act 1998 in facilitating employees with a disability.

If the Labour Court considers Ms Daly cannot, even with “reasonable accommodation” return to work at the school, it must consider whether she was subject to unlawful discrimination and provide a reasoned basis for any award of compensation, the Supreme Court directed.

The Irish Human Rights and Equality Commission described the case as a “benchmark” concerning the right to work of persons with disabilities and the extent of employers obligations to facilitate that.

Ms Daly’s appeal centred on interpretation of Section 16, enacted to give effect to the 2000 EC Directive on equal treatment in employment and occupation.

Section 16 provides an individual does not have to be recruited, promoted or retained in a position if they will not, or cannot, undertake the duties attached to that position.

It also provides for employers to make reasonable accommodation to enable disabled persons access employment unless that would impose a “disproportionate” burden on the employer.

Ms Daly was employed from 1998 by a Nano Nagle School in Co Kerry, which provides services for 77 children with physical intellectual and behavioural challenges. In 2010, as a result of a road accident, she was confined to a wheelchair due to paraplegia.

When she sought in 2011 to return to work at the school, it had her assessed and it was concluded she was unable to perform seven of 16 identified duties of a SNA. The NCSE also refused the school principal’s request for funding for a “floating SNA”.

Ms Daly took proceedings after the school decided not to reemploy her and the Labour Court awarded her €40,000 compensation after finding the school construed its duty under Section 16 too narrowly.

After the school successfully appealed to the Court of Appeal, Ms Daly secured a further appeal which was allowed on Wednesday by four of the five judges.

Giving the majority decision, Mr Justice John MacMenamin said the Labour Court did not fulfil its statutory duty in how it determined the matter.

The determination omitted relevant evidence of the occupational therapist, including Ms Daly could not work as a SNA in a reorganised environment, and did not resolve whether the NCSE had misinterpreted the school’s request for funding for a floating SNA, he said.

The Labour Court’s “selective” record of the evidence of the therapist played a significant role in the Court of Appeal decision, he noted.

In interpreting section 16, he said its purpose is to achieve equality.

An employer’s mandatory primary duty is to take “appropriate measures” to enable a disabled person to work and train unless those measures would impose a disproportionate burden.

Appropriate measures mean “effective and practical” measures, including relating to distribution of “tasks”. Section 16 cannot be read to permit an employer, by deploying the term “tasks”, to divide up the term “duties” and effectively render an employee’s duty incapable of performance.

In this case, he considered “very few, if any” of the specified “task” demands of a SNA can be seen as entirely divorced from duties, he said.

He stressed the employer’s duty of accommodation is not infinite and cannot result in removing all the duties which a disabled person is unable to perform as that would become a “disproportionate burden”. The test is of “reasonableness and proportionality” and an employer cannot be under a duty entirely to re-designate or create a different job to facilitate an employee.

Neither the Act, nor the EC Framework Directive on Employment, require “full competence” as to the tasks that are the essence of the position at issue, he held.

Full competence is to be assessed as contingent upon there having been reasonable accommodation and appropriate measures.

In light of that interpretation and the evidence, he allowed the appeal and remitted the matter to the Labour Court.

Pandemic has shown how ‘undervalued’ frontline workers were – Higgins