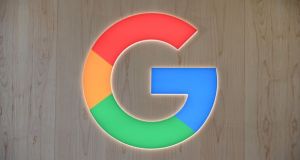 Rossa Fanning SC, for Facebook Ireland and Michael Howard SC, for Google Ireland told the court there are ongoing discussions with the Courts Service aimed at agreeing a voluntary protocol to address any future need for removal of material which is unlawful or in breach of court orders. File photograph: AFP

The Courts Service has obtained interim High Court orders against Google Ireland and Facebook Ireland aimed at discovering the identity of those responsible for certain social media postings, including video recordings of court hearings concerning an elderly woman who is a ward of court.

High Court president Mr Justice Peter Kelly noted on Friday the defendants had said they could not consent to the orders but neither had they objected.

He was satisfied to make orders requiring the defendants to give the Courts Service, within 14 days, any subscriber information in their possession or control which might assist in identifying the posters with a view to considering possible action against them.

He was satisfied the conditions for those orders were triggered because the defendants had unwittingly become involved in the placing on sites of material which it was not lawful to have placed there. He was not criticising them about that and noted they operate under a regime governed by European regulations on hosting.

He continued to early March, with liberty to apply, other interim orders, made earlier this week, which required the defendants to remove the material at issue. Both defendants have complied with those orders and the material has been removed but there are concerns other material may be posted, he noted.

He was told on Friday by Rossa Fanning SC, for Facebook Ireland and Michael Howard SC, for Google Ireland, there are ongoing discussions with the Courts Service, represented by Donogh Hardiman BL, aimed at agreeing a voluntary protocol to address any future need for removal of material which is unlawful or in breach of court orders.

Mr Howard asked that the matter be put back to facilitate agreeing that protocol but the judge said he would make the orders in the interim to ensure protection of the rights, including to privacy, of the elderly woman.

He noted court orders had consistently been made in wardship proceedings concerning the woman which prevented publication of any material which would or might identify her.

The woman’s son, the judge said, has made numerous applications and appeals arising from his mother, aged in her nineties with a number of health conditions, being take into wardship and placed in a hospital and a nursing home.

The son had also given an undertaking to the court in May 2017 not to publish material about his mother after it was alleged he was in contempt of court arising from the posting of material on social media, including a video of him shouting at her in the nursing home.

In its proceedings, the Courts Service has claimed the recent posts and videos breach court rules preventing any recording of court proceedings as well as orders preventing identification of the woman as a ward.

The videos objected to include one of the son addressing Mr Justice Kelly in court earlier this month in terms which lead to the judge leaving the bench after directing gardaí to remove the son for persistent interruption of the court’s work during that and earlier hearings.

The judge directed the son, who alleged, among a range of claims, there is a “constitutional crisis” in the State and that no courts have sat with appropriate jurisdiction since 1924, be detained in Dublin’s Bridewell Garda station until the hearing concerning his mother had concluded. A video of the son being “interviewed” by another man outside the Bridewell later that day was among the material objected to.