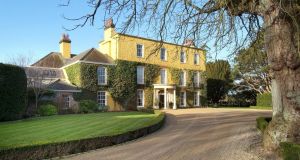 A handyman who fell 4m to the ground while clipping ivy at a mansion in Co Kildare has been awarded €323,000 damages by the High Court.

Mr Justice Anthony Barr said Martin Ruffley suffered a significant injury as a result of the incident and he was satisfied his pain is genuine and he is affected by ongoing pain and disability. The judge accepted Mr Ruffley also suffered post-traumatic stress disorder.

Mr Ruffley, Kilcullen, Co Kildare had sued Cathal Ryan and Danielle Ryan, trading as Lala Investments, as a result of the fall while working at Stacumny House, Celbridge, on June 12th, 2012.

Mr Ruffley, a general handyman, lived in a house on the Staumny estate and was cutting ivy from the upper part of the house on the date of the incident. While stepping from a ladder onto the scaffolding, the scaffolding moved and he fell to the ground.