Brian and Mary O’Shaughnessy have been living a ‘nightmare’, court hears 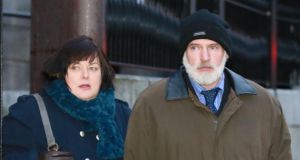 A couple have lived an eight-year nightmare after their home was demolished without any prior notice to them when a new dual carriageway was being constructed, the High Court has been told.

Brian and Mary O’Shaughnessy have been living in rented accommodation since their single storey two bedroom “old Irish farmhouse”, at Annaholty, Birdhill, Co Tipperary was razed to the ground on September 6th, 2006.

While other houses were acquired and demolished for construction of the dual carriageway between Limerick and Nenagh, the couple were informed by the NRA in 2003 their home did not need to be acquired in order to complete the project.

It is claimed the council and the NRA were responsible for the operation, design and acquisition of land and oversaw construction of the N7 dual carriageway scheme; the consultant engineers were the contractors engaged to build the scheme and Midland Fencing was a subcontractor of the joint venture.

The defendants all deny negligence on their own part and the court heard they have served each other with notices of contribution and indemnity, alleging responsibility lies with the other defendants.

Midland Fencing says it was told by the contractors to demolish a number of properties along the route of the N7, including the O’Shaughnessys’ house, which it described as derelict, delapidated, unfurnished and uninhabited.

In evidence, Mary O’Shaughnessy said she and her husband bought the house for IR£34,500, they had lived there for a period, also rented it out and had intended to live there permanently.

Between 2001 to 2003, there was uncertainty over the route of the new road and they were told in 2003 the house would not be subject of a CPO, she said. They borrowed monies to renovate and extend it but the plans had to be revised, she said.

Prior to the demolition, her husband was carrying out preparatory works for renovating the house and planning permission was sought. By late August 2006, roof slates had been removed and furniture taken out.

On the evening of September 6th 2006, she went to collect post at the house but it was gone. Initially she thought she was “at the wrong place” but, when she realised what had happened, became very upset and felt like she and her husband’s lives had been “wiped out”.

She learned the house had been demolished earlier that day. She and her husband had no prior notice it was to be demolished and what had happened was a “nightmare”.

Denis McDonald SC, for the couple, said, irrespective of the dispute between the defendants, his clients had been treated with “callous disregard” since the demolition and only received two payments from the Council of €10,000 each.

Because they had to rent properties, they could not meet mortgage repayments for the demolished house and their lender sought repossession orders in 2009 for that but those proceeding were on hold pending this case.