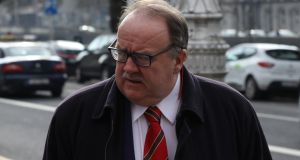 Bank of Ireland obtained the possession order in April 2019 from the Circuit Court for the home at Brighton Avenue, Foxrock, of Adrian Blanc (above) and his wife. File photograph: Collins Courts

A businessman and his wife who owe more than €1 million in mortgage arrears have lost their High Court appeal against a possession order for their €2 million south Dublin family home.

Bank of Ireland (BofI) obtained the possession order in April 2019 from the Circuit Court for the home at Brighton Avenue, Foxrock, of Adrian Blanc and his wife Lucille.

They had borrowed €1.7 million from the society when their home was valued at €2.5 million and used it to pay off an existing loan.

ICS loans were transferred to BofI in 2014 under the Central Bank Act.

The court was told arrears were mounting at the rate of €11,560 a month, there was an outstanding total debt of €1,764,000 and the couple had refused to sell or allow their home to be sold to pay off all or part of that.

Separate appeals were brought by the Blancs over the possession order.

In a judgment published on Friday, Ms Justice Miriam O’Regan dismissed both appeals.

She noted the ICS loan was to be repaid over a 15-year term. Interest only was repayable in the first three years after which interest and principal was to be paid.

The arrangement involved the loan and a mortgage under which the defendants offered the Foxrock home as security to ICS, she noted.

BofI wrote to the defendants in 2016 about the arrears and indicated, because of default, it wanted payment of the total monies due under the 2008 arrangement.

The judge noted, among various claims, the defendants alleged the contract imposed terms on them which were unfair and not individually negotiated.

They complained the bank had knowledge of the “disastrous” economy in 2008 and there was a conspiracy against them to violate their rights. They also raised issues concerning the ongoing investigation under the tracker-mortgage scheme, interest rates and the applicable code of conduct.

The judge said it was “noteworthy” the defendants had not contradicted an affidavit of the bank to the effect, before the mortgage was executed, all documents were made available to them and they had independent legal advice.

She said the issue before her concerned possession only and she was not asked to make a judgment of any kind concerning the sums of money due and owing by the defendants to the bank.

She had to decide, when the bank initiated the process leading to the legal proceedings in January 2016, whether there was sufficient default in the loan repayments sufficient for it to commence those proceedings.

It was “unassailable” there was default by the date of demand and therefore the bank was entitled to call in the entire indebtedness and to look for possession if the entire debt was not paid, she held.

She was also satisfied there was compliance with the relevant code of conduct because more than the applicable three months had passed from the date of threat of legal proceedings to the date of their institution.

The court was correct in awarding the possession order, she ruled.