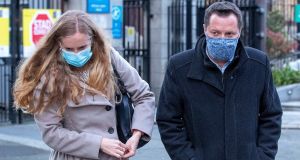 A damages action has been brought in the High Court on behalf of a child who was a baby when she suffered a catastrophic brain injury as a result of a head-on road collision.

She was on holiday with her mother and father at the time.

Suing through her mother, Orla Vezignol McGuinness, she has brought an action against the driver of the car, her father Laurent Vezignol, and the owner of the car, Flynn Bros Rent a Car, Ballygar, Athlone Road, Roscommon town.

Oonah McCrann SC, instructed by Ernest Cantillon solicitor, told the court the family was living in South America at the time of the accident but were in Ireland “to show off the baby to the grandparents.”

They had stopped at a garage in Lissycasey to buy chocolates for a friend they were going to visit next. While her mother was in the shop, Mr Vezignol took his daughter out of her seat to comfort her. When Luna’s mother returned, she took the baby and was strapping her into her seat when Mr Vezignol, a French national, pulled the car out onto the incorrect side of the road.

Counsel said Luna was unrestrained at the time of the collision. “In that instance the family’s lives imploded,” she told Ms Justice Bronagh O’Hanlon.

The baby suffered multiple skull fractures and was taken by helicopter to a hospital in Limerick and later transferred to Dublin where she had surgery. She was not discharged from hospital until the end of April 2016 and then spent four months in the National Rehabilitation Hospital.

Counsel said Luna is a remarkable little girl who is going to need significant care. She is very much loved and brings joy to all her family.

It is claimed, without warning, Mr Vezignol drove the hire car on the incorrect side of the carriageway and the collision occurred with an oncoming vehicle. It is further claimed there was failure to ensure the intended path of travel was safe and free of vehicles and to keep any or any proper lookout.

Liability is admitted and the case is before the court for assessment of damages only. It was decided at mediation an interim payment for the next five years will be sought from the court.