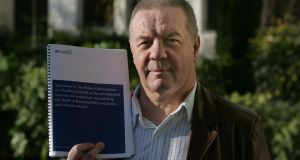 A campaigner for the rights of victims of the Troubles has launched the first legal challenge in Northern Ireland to the UK leaving the European Union.

Raymond McCord lodged papers at the High Court in Belfast on Thursday seeking a judicial review of the British government’s move towards Brexit.

His lawyers claim it would be unlawful to trigger Article 50 of the Lisbon Treaty without parliament voting on the move.

They also contend it would undermine the UK’s domestic and international treaty obligations under the Good Friday Agreement, and inflict damage on the Northern Ireland peace process.

With similar legal action already underway in England, efforts are being made to secure an initial court hearing in Belfast next week.

Mr McCord, whose son Raymond Jr was murdered by the UVF in north Belfast in 1997, is believed to be the first person in Northern Ireland to issue proceedings over Brexit.

He is taking the case amid concerns that European peace money which goes towards victims of the Troubles may be discontinued.

The challenge centres on the British government’s response to the June 23rd referendum result on the UK’s membership of the EU.

His legal team claims they were not given assurances that Article 50, the mechanism under which the UK begins the formal process of leaving the EU, will not be invoked without first securing a parliamentary mandate.

Any attempt to use royal prerogative powers instead cannot be justified, they contend.

“As a victim of the most recent conflict in Northern Ireland, Mr McCord is very concerned about the profoundly damaging effect that a unilateral withdrawal of the UK from the EU will have upon the ongoing relative stability in Northern Ireland,” he said.

“He is concerned that any withdrawal would be contrary to the UK’s international law obligations pursuant to the Good Friday Agreement.”

Insisting any notification under Article 50 must be done lawfully and constitutionally, Mr O’Hare described the legal challenge as “an important constitutional case which engages the Northern Irish public interest in a way that no other case has or is likely to for many decades”.