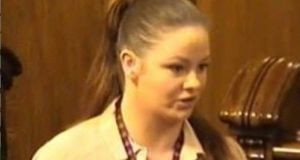 Jolene Bunting, an independent representative, was suspended from Belfast City Council last September after 14 complaints against her were received.

Mr Justice Maguire dismissed Jolene Bunting’s appeal against receiving a four-month interim suspension after finding that the action was merited.

He held that some of the allegations “raise grave issues about the extent to which confidence in local government institutions in Northern Ireland may, if appropriate steps are not taken, be compromised”.

Ms Bunting, an independent representative, was suspended from Belfast City Council last September after 14 complaints against her were received.

The Local Government Commissioner for Standards took the step pending the outcome of an investigation into all of the allegations. These included:

:: Comments she made on a video published in December 2017 outside the Belfast Islamic Centre.

Accompanied by Jayda Fransen, then deputy leader of far right group Britain First, both allegedly spoke of their opposition to the growth of Islam in the city.

:: Ms Bunting’s participation at a Britain First rally in Belfast in August 2017 - when Ms Fransen declared Islam “the biggest threat to civilisation” - and subsequent press and social media comments.

:: Her alleged use of the Council Chamber in January 2018 when Ms Fransen was filmed sitting in the Lord Mayor’s chair and wearing ceremonial robes.

:: A social media post in May 2018 which depicted a cartoon character dressed in an Irish Tricolour and wearing a hat bearing the phrase “Please be patient I have Famine”.

As part of the appeal it was contended that, as a political representative, Ms Bunting has enhanced freedom of expression under Article 10 of the European Convention on Human Rights.

Delivering judgment in the case, Mr Justice Maguire held that the interim suspension did amount to a prima facie breach of her Article 10 rights, with political consequences for her ability to serve constituents.

But turning to justification for the action taken, he ruled that the complaints about events outside the Islamic Centre and the Britain First rally crossed the line for protected public expression.

Referring to Ms Fransen’s remarks at the rally, which the councillor publicly associated herself with, the judge found it went well beyond the appropriate bounds of protected speech and involved language offensive to those of the Islamic faith.

He said: “The suggestion that every single Muslim is obliged to kill the listeners and their families, and that there were no moderate Islamic people, and that Islamic Mosques are ‘dens of iniquity’ will be likely, as the court sees it, to vilify Muslims; to stir up hatred against them; and to invite discrimination directed at them, if not something worse.”

The staged event outside the Islamic Centre also exceeded the bounds of protected speech, he confirmed.

“References to ‘ghetto Muslims’, ‘Muslim colonisation’, to mosques as ‘dens of iniquity’ and ‘monstrosities’, and to ‘creeping Islamification’ are designed to instil public revulsion against those of Islamic faith,” Mr Justice Maguire added.

Based on those findings, he decided that an interim suspension of four months was merited.

Dismissing Ms Bunting’s appeal, the judge also said: “In particular, this period should not be viewed as tokenism and should be seen as reflecting the seriousness of the matter at issue and the need to provide a level of deterrence pending the outcome of the full investigation.”