Flight attendant claims she hurt her neck and back incident 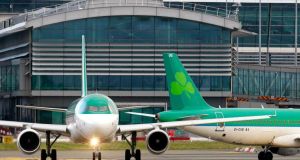 An Aer Lingus cabin crew member is suing the airline over injuries allegedly received as a result of an alleged hard landing at Naples airport in Italy.

Aisling McCormack Pittion (39), Ardagh Court, Crumlin, Dublin, claims she hurt her neck and back when the aircraft landed heavily on the ground as she sat ready for landing on July 15th, 2011.

In High Court proceedings, she makes a number of claims including that the airline failed to provide a safe place or system of work, failed to train her adequately or at all and failed to implement any or any adequate risk assessment. She also claims there was a failure to land the aircraft safely.

Aer Lingus denies her claims and contends she was the author of her own misfortune, failed to take any or reasonable care for her safety and failed to exercise proper attention and follow proper procedures.

The President of the High Court, Mr Justice Nicholas Kearns, refused an application from Ms McCormack Pittion’s lawyers for the release of material held by Aer Lingus which she says she needs for her case.

The court heard the airline provided some discovery concerning “touchdown flight data” recorded as part of the flight but objected to further information then sought in relation to the approach of the flight from 2,000 feet before touchdown.

The airline argued the information sought was not necessary or relevant in light of her claim she was injured as a result of the G-forces exerted on the aeroplane. The approach flight data would provide no information in that regard, it argued.

The data sought was also subject to a confidentiality agreement between Aer Lingus and the trade unions Impact and the Irish Airline Pilots Association (IALPA) under a data gathering agreement which can only be released by court order, it said.

Aer Lingus also claimed the release of that information is not permitted under a 1996 EU regulation.

Ms McCormack Pittion’s lawyers said an expert employed by them required the information to get a better understanding of the aircraft’s approach. This would enable the expert to determine if the approach was unstable or stable until touchdown.

Mr Justice Kearns said the issue of the G-force would be subject of expert evidence at the hearing of the case. He did not believe ordering further discovery was necessary to enable Ms McCormack Pittion make her case.