Woman had to leave refuge after husband tracked her phone 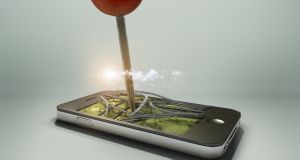 It is possible to track the location of a phone using certain information, such as an email address and password, provided the phone’s location services are switched on.

A woman had to leave a domestic violence refuge after her husband tracked her there using the location of her phone, the Dublin District Family Court was told on Thursday.

In the first of a series of ex-parte applications – made with only one side present – a young woman told Judge Gerard Furlong that, in May, her husband slapped her in the face and arms, pushed her and cut her with glass. She pulled up the sleeve of her top to show the judge the scar.

In a written statement to the court, she said on a separate occasion he burnt her with a cigarette on the other arm, which she also showed the judge.

She said she left the family home in June and went to a refuge, but her husband tracked her down using the location of her phone.

An invisible app may also be placed on a person’s phone to enable information, including location, to be passed to another person

“I had to leave for my safety and for the safety of the others there,” she said.

Though not discussed in court, it is possible to track the location of a phone using certain information, such as an email address and password, provided the phone’s location services are switched on. An invisible app may also be placed on a person’s phone to enable information, including location, to be passed to another person.

The woman told the judge she had only recently found out she could come to court for protection.

She did not seek a barring order, which requires an abuser to leave the family home, as she did not want to go back there, she said. Instead she sought a protection order, a short-term order requiring her estranged husband not to use violence or threaten to use violence or put her in fear, or watch her new home. She told the judge she did not want her estranged husband to know where she was now living.

The judge said he would not include her address on the order. He said the woman should return to court in October for a full hearing of the case, when her estranged husband would also be present.

“I am frightened to see his face,” the woman said.

The judge advised her to mention that to the garda at the court reception desk and he would help her.

Meanwhile, another woman was given an eight-day barring order against her partner after showing the judge her arms.

“I have lumps in my head as well,” she said.

There had been no argument before the violent outburst.

She told the judge her partner used drugs and had told her in the past he would kill her and shoot her. There had been mental abuse, she said.

“But I never thought he would hit me.”

The judge granted a barring order for eight days. He advised the woman to bring the order to her local garda station and they would remove her partner from the family home.

“I don’t have to be there when they got to the house, do I?” she asked. The judge said she did not.

In a separate case, a man was granted a protection order against his wife of 28 years. He said she was an alcoholic and would come home drunk, get into the bed and dig her nails into him to wake him up. Then she would put the television on loudly.

Recently, she had put their adult son out of his room, so that she could move into it. She had also raised her arm to hit their teenage daughter, but stopped herself. He said he was worried about the teenager who was afraid of her mother.