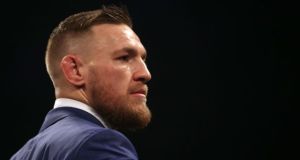 He had been summoned by gardaí to appear at Dublin District Court on Wednesday. However, the 31-year-old did not attend and his case was struck out.

His solicitor Rory Staines told Judge John O’Leary he was aware an application would be made. The prosecuting Garda Anthony Byrne asked for a strike out.

“Documents were produced before court this morning,” he explained.

Judge O’Leary noted McGregor’s documents were “in order” and struck out the prosecution.

In November, McGregor avoided a jail sentence but he was convicted and fined €1,000 for an unprovoked attack on a man in a Dublin pub.

Desmond Keogh, who was in his 50s from south west Dublin, had been at the Marble Arch Pub, Benbulben Road, in Drimnagh at about 2.30pm on April 6th last year when he was punched.

Coronavirus: 306 new cases and one further death reported by Nphet 17:57
Pat Finucane murder: British government will not establish public inquiry 17:44
Seventeen life-sentence prisoners released last year 17:41
Man who stole more than €95,000 in social welfare under false names jailed 17:30
Three jailed over refusal to pledge to stay away from farm to remain in prison 17:20