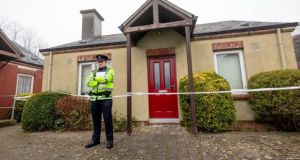 A garda outside the house on Maudlin Street in Kilkenny. Photograph: Dylan Vaughan

A man (28) has appeared in court charged with the murder of Kilkenny pensioner Anne Butler.

Trevor Rowe, Abbey Street, Kilkenny was remanded in custody after he was charged with the murder of the 71-year-old at her home at Maudlin Street in the city on March 20th.

The body of Ms Butler, who lived alone, was found by gardaí in her home on Wednesday evening, some five days after she is thought to have died.

Detective Garda Martin Power told the court that at 1.52pm at Kilkenny Garda Station he formally arrested Mr Rowe for the murder. The accused was charged with murder and made no reply after charge. Inspector Paul Donohoe said the State was seeking a remand in custody.

Mr Rowe appeared before Kilkenny District Court wearing a navy tracksuit and black runners. Solicitor Ed Hughes, acting on behalf of Mr Rowe said that he was reserving his position in relation to bail.

The judge said she would reserve her position in relation to the independent pathologist’s report. She remanded the defendant in custody to Cloverhill Prison to appear by videolink before Cloverhill District Court on April 1st.

Family members of the accused and the deceased were both in court for the short hearing.

Coronavirus: Five more deaths brings toll in State to 1,664 20:09
Cork City Council opens a digital book of condolence for George Floyd 20:08
Irish aid workers on the Covid-19 front line in Greece and Iraq 20:03
Churches may reopen for public events in late June, Archbishop says 19:56
Some larger stores to reopen on Monday ahead of schedule 19:54