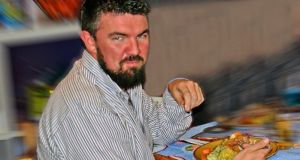 A Dublin man charged with the murder of Kenneth O’Brien (pictured), whose dismembered body was found in a suitcase in the Grand Canal, has been further remanded in custody.

A Dublin man charged with the murder of Kenneth O’Brien, whose dismembered body was found in a suitcase in the Grand Canal last month, has been further remanded in custody.

Mr O’Brien (33), from Lealand Road, Clondalkin, was reported missing on January 15th after leaving his home telling family members he was going down the country to work.

The following day his torso was found in suitcase by walkers at the Grand Canal near Celbridge, Co Kildare. Investigating gardaí later found other body parts during searches along the canal.

Last Friday, Mr Wells was charged with the murder of Mr O’Brien on or around January 15th and 16th. The murder is alleged to have occurred at the defendant’s address.

Family and friends of Mr O’Brien were present for the brief five minute hearing on Thursday.

Sgt Gerard Moore, of Leixlip Garda station, told Judge Patricia McNamara bail “was not an option” in the District Court as it can only be dealt with at the High Court.

A book of evidence has yet to be prepared, the court heard. Mr Wells told his barrister he would like to appear via videolink at his next hearing.