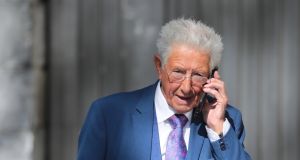 A judge has reserved ruling on whether the trial should proceed against comedian Sil Fox who denies sexually assaulting a woman in a bar in Dublin.

Judge Paula Murphy said she will re-watch the CCTV evidence before delivering her decision on Wednesday.

Sylvester “Sil” Fox (87), has pleaded not guilty to sexual assault of a woman on December 17th, 2018 after he agreed to have his photo taken with her.

He has gone on trial at Dublin District Court. The State had concluded calling prosecution evidence and the trial has been delayed as a result of the Covid-19 crisis.

The defence have not yet opened its case.

Counsel Emer Ni Chuagain, for Mr Fox, lodged a written preliminary application for a dismissal to be considered. She has argued that there was no case to answer.

State solicitor Alva O’Herlihy said on Monday the CCTV evidence was grainy and it was accepted the woman’s allegation was not corroborated by her friends who were present.

They gave evidence that they had not seen it but said their friend had told them straight afterwards.

The State solicitor argued the prosecution had shown Mr Fox has a case to answer and it should proceed to the next stage.

The defence, however, submitted that some of the woman’s evidence could not be true.

The veteran comedian, who grew up in the Liberties but has an address at Wellington Lawn, Templeogue, Dublin 6, was remanded on continuing bail and does not have to attend on the next date.

The trial heard he had been asked for a selfie picture with the middle-aged woman who had been on a Christmas night out with friends in a bar in the city-centre’s south-side.

Mr Fox agreed to have his picture taken.

The woman claimed that as her friend said “Smile”, “Mr Fox proceeded to put his hand on to my lap, on to my groin and he tickled my vagina, and doing so he said, ‘You will always remember where this picture was taken’.”

She said she was stunned but stayed at the pub because she did not want to spoil the night for her group.

She saw him later that night in the pub with Barry Murphy from Apres Match. She confronted Mr Fox and told him he was a dirty old man”.

His reply to her sexual assault accusation, she claimed, was “You should be so lucky” and she then told him she would “put you on Facebook”.

The complainant alleged he told her “This is ridiculous, this is stupid”.

CCTV evidence was shown to her and she agreed it took three seconds, not 30 which she had claimed, to take the photo and she smiled and her hand was going toward Mr Fox as he leaned in.

The trial heard that her friends at the table did not see it but saw her expression change after the photo was taken and she became more upset as the night went on and after she confronted him. It was accepted they also had a sing-song later.

One of her friends told the court she understood the complainant had said he would have touched her vagina if she had not been “carrying weight”.

In an account given to gardaí Mr Fox said she was a liar and trying to “ruin my name”.

He denied the allegation completely and said, “That is a load of crap”.

Mr Fox told Det Garda Shane Behan the woman had put her hand around him.

The detective had agreed with the defence that Mr Fox had no prior convictions and had never been accused of an offence before.