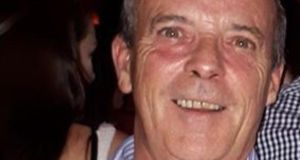 William Eagers (60) was charged with the murder of Jean Eagers (57) on Wednesday.

The husband of a woman found dead in her west Dublin home earlier this month has been charged with her murder.

William Eagers (60) was charged on Wednesday with the murder of Jean Eagers (57), and with production of a samurai sword while committing the offence in the course of a dispute.

The mother of two died in the incident at her house in Willow Wood Grove estate in Hartstown on the morning of June 21.

The defendant appeared before Judge Michael Walsh during an evening sitting of Dublin District Court.

Detective Garda Shane McCartan told the court the defendant “made no reply to either charge after caution” and he was then handed copies of the charge sheets.

The defendant did not address the court and has not yet indicated how he will plead.

Judge Walsh acceded to defence solicitor Fiona Brennan’s request that her client would be remanded in custody to appear at Cloverhill District Court next Tuesday.

An application was made for legal aid. Ms Brennan said her client was in receipt of the Covid-19 payment and he had been working part-time as a taxi driver.

She asked the court to order that the defendant would get appropriate medical attention and supervision in custody.

Judge Walsh agreed to recommend that he be medically assessed in custody and provided with such treatment as the prison governor and the medical officer deemed appropriate.