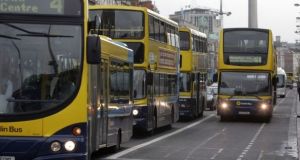 A Dublin Bus driver has been sent forward for trial accused of careless driving causing the death of a cyclist.

Mary White (55) was cycling along Burlington Rd in south Dublin, at about 9.40pm on November 17th, 2014, when she was hit by a bus and suffered serious injuries.

She was in a critical condition when she was rushed to St Vincent’s Hospital and she died two days later.

The scene of the incident was examined by Garda forensic collision investigators.

Dublin Bus driver Osborn Best Irabor (51), had been arrested by arrangement and was charged in April at Donnybrook Garda station.

The father-of-three is charged with careless driving causing death of Ms White.

He faced his second hearing at Dublin District Court on Thursday where a book of evidence was served on him.

DPP has directed that Mr Irabor must face trial on indictment.

Judge Michael Walsh then made an order sending him forward for trial to appear at Dublin Circuit Criminal Court on July 15th.

He was warned that if he intended to use an alibi in his defence he must notify the prosecution within 14 days.

Earlier, Garda Michael McHugh gave evidence detailing the arrest and he had told the district court that the defendant made no reply when the charge was put to him.

The driver has not yet entered a plea to the charge. Legal aid has been granted.