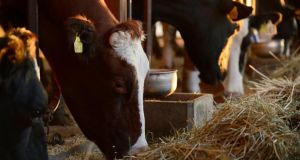 Asked why a farmer might dock a cow’s tail, the court was told it may be done for “milker’s ease”. Photograph: Akio Kon/Bloomberg.

A Cork farmer convicted of animal cruelty for “barbaric” bovine tail docking has been fined €4,000.

The case against Noel Lynch, a married father of three, is believed to be the first of its kind in the State.

Mr Lynch was convicted of docking the tails of five cows at his farm in Caher, Churchtown, Mallow, Co Cork causing “unnecessary pain” and leaving the animals “permanently injured”.

Mr Louis Reardon, a vet inspector with the Department of Agriculture’s Special Investigations Unit, described tail docking as a “barbaric” practice with no scientific basis, that leaves animals permanently disabled.

The practice involves applying a rubber band to the cow’s tail. The band causes severe pinching, cutting off blood supply, causing the death of the tail tissue.

“It’s a painful process for the animal, the pain persists for as long as five to seven days and it can be quite intense pain,” Mr Reardon said.

At Mallow District Court, Helen Boyle BL told how Mr Lynch and his wife were in the milking parlour when Department of Agriculture officials arrived at the farm on July 5th, 2012.

Inspectors found that many of the herd had suffered bovine tail docking.

Photographic evidence of five affected animals clearly showed that the cows tails had been docked and the blood supply cut off, Mr Reardon said.

Rubber bands had been applied between 6 and 15 inches from the tip of the tail in five different animals, the court heard.

Asked why a farmer might dock a cow’s tail, Mr Reardon said it may be done for “milker’s ease” and said there were occasions where it may be done if an animal suffered an injury to its tail.

“A shortened tail is less likely to hit people, particularly when milking between the legs,” he said.

However, Mr Reardon said bovine tail docking removed a cow’s ability to swat flies away, leading to unusual behaviour such as “stamping or walking around” in a bid to escape flies.

He agreed that it was a view that tails might be docked to prevent the contamination of udders through fecal matter. ‘But I don’t believe there is any merit to it,’ Mr Reardon said.

Mr Lynch, who has had €4,000 deducted from his single farm payment, has one previous conviction for possession of illegal growth hormones, for which he was fined £4,000 and given a four-month prison sentence. “I’ve no familiarity with the pain threshold of animals,” Judge Aeneas McCarthy said.

Convicting Mr Lynch, the judge imposed a four-month suspended sentence on condition that no further offenses are committed for two years and imposed a €4,000 fine. “The court regards this as a serious matter,’ the judge said.