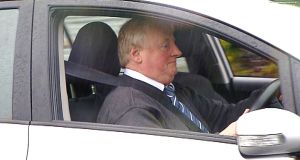 Bill Kenneally is an accountant by profession and was well-known in the region as a basketball coach for many years. File photograph: Patrick Browne

Former basketball coach and political activist Bill Kenneally has been sent forward to the circuit criminal court in relation to 171 charges which allege that he sexually assaulted three boys in the 1970s and 1980s.

Kenneally (68), formerly of Summerville Avenue, Waterford city, appeared before Waterford district court on Monday morning and was served with a book of evidence .

Inspector Anthony Dineen said that the Director of Public Prosecutions had consented to the accused being sent forward for trial under the Criminal Procedure Act. He applied for that direction to be made to the current sittings of Waterford circuit criminal court.

Judge Kevin Staunton issued a formal alibi warning to Bill Kenneally, telling him that if he intends to rely on alibi evidence in his trial, he must supply details to the State within 14 days.

Solicitor Matthew Byrne asked for February 5th to be the return date to the circuit court and there was no objection from gardaí­.

Judge Staunton sent Bill Kenneally forward for trial, remanding him in custody until Tuesday of next week, February 5th.

He also granted legal aid for two counsel at the trial as well as a solicitor, and agreed to an application from Mr Byrne to grant legal aid in respect of each of the three complainants.

Mr Kenneally was present in court but not called upon to speak during the hearing. He is an accountant by profession and was well-known in the region as a basketball coach for many years. He was also a member of Fianna Fáil and acted as a tallyman for the party at several election counts.

1 All students will not return to school even if social distancing rules are relaxed – McHugh
2 Trump announces clampdown on social media companies
3 Miriam Lord: Taoiseach is trapped in a Zoom session from hell
4 Maria Bailey takes action against newspaper over ‘swing gate’ coverage
5 What exactly will happen in phase two of easing restrictions?
Real news has value SUBSCRIBE