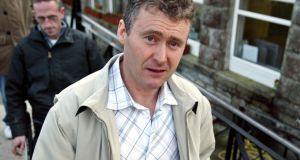 Dessie O’Hare, who was known as ‘The Border Fox’, pictured in 2003 .Photograph: Colin Keegan/ Collins

Former INLA terrorist Dessie O’Hare, who was known as ‘The Border Fox’, is unlikely to get an early release as he appeals the severity of his seven-year sentence for falsely imprisoning a family, the Court of Appeal heard on Friday.

O’Hare was due to appeal his sentence but had been unable to consult with his legal team while in prison. Mr Justice George Birmingham agreed to adjourn the hearing, saying there is “no particular urgency” given that O’Hare’s prison term is not due to expire soon and even if the Court of Appeal interferes with his sentence, the judge, “wouldn’t expect an early release.”

A previous appeal hearing last year was adjourned after O’Hare dismissed his lawyers.

O’Hare of Slate Rock Road, Newtownhamilton, Co Armagh was jailed in 2019 by the Special Criminal Court for seven years for falsely imprisoning a family in their home and for leading a “disturbingly violent” attack on another man.

The 63-year-old admitted to assaulting John Roche, causing him harm, at The Towers, Garter Lane, Saggart, County Dublin on June 9th, 2015. He also pleaded guilty to falsely imprisoning Martin Byrne at Rathcoole and Saggart on the same date. The non-jury court was asked to take two counts of falsely imprisoning Mr Byrne’s wife and son into consideration.

O’Hare was jailed for three years for assaulting Mr Roche and ten years with the final three years suspended for the rest of his life for falsely imprisoning Mr Byrne. The sentences are running concurrently. Passing sentence, Mr Justice Tony Hunt said that the violent side of O’Hare’s personality was not in remission and that his threat to society had “not completely abated”. The judge stressed that O’Hare was “an organiser and high-level participant” in the incident and said that the non-jury court did not accept that the offending was “isolated” even though he had applied himself positively to some aspects of his life in the last 13 years.

In 1988, O’Hare was sentenced to 40 years imprisonment for falsely imprisoning and assaulting Dublin dentist Dr John O’Grady, causing him grievous bodily harm, but was released under the terms of the Belfast Agreement in 2006. O’Hare kidnapped Dr O’Grady from his home in Cabinteely on October 13th, 1987 and held him captive for 23 days. During that time O’Hare chopped off the tips of Dr O’Grady’s fingers while demanding a ransom of IR£1.5m (about €20million in today’s money). Gardaí freed Dr O’Grady following a shoot-out in the Dublin suburb of Cabra. One officer was shot and seriously wounded.

O’Hare also has convictions for firearms offences and for assaulting a garda.